ISLAMABAD  – Officials in Afghanistan said Monday at least nine young students were killed and four wounded when an explosive remnant of war accidentally detonated outside a school in eastern Nangarhar province.

The provincial governor’s office said in a statement the incident in Lalpur district occurred when an old mortar shell in possession of a corn seller exploded as he tried to remove the dust off it.

“Nine children were martyred and four others were injured when an old mortar shell exploded near a corn seller,” the statement said. It did not talk about the fate of the vendor, but reports said he was also believed to be among the dead.

International studies have consistently ranked Afghanistan as one of the most landmine- and unexploded ordnance-impacted countries in the world.

Nine members of one family, including four girls and two boys, were reportedly killed last November when an explosive remnant of war went off inside a home in northeastern Kunduz province. Three other children were injured in that incident. One of the children unknowingly had brought the unexploded device into the home after finding it in a nearby field. 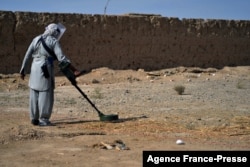 FILE – A deminer from the HALO (Hazardous Area Life-Support Organization) Trust scanning the ground for mines with a metal detector in Nad-e-Ali village in Helmand province, Nov. 9, 2021.

The United Nations Children’s Fund, or UNICEF, reported earlier this month that the Afghan conflict had killed more than 28,500 children since 2005, accounting for 27% of all verified child casualties globally.

The Taliban takeover of Afghanistan last August and the withdrawal of remaining United States-led foreign troops later that month have effectively ended the war in the country. But aid workers say unexploded ordnance from the conflict and landmines from previous wars continue to kill, injure and maim Afghan civilians.

U.N. and other global aid groups say years of war, natural calamities and extreme poverty have left around 24 million Afghans without enough food this year, with more than 3.2 million children under 5 facing acute malnutrition.