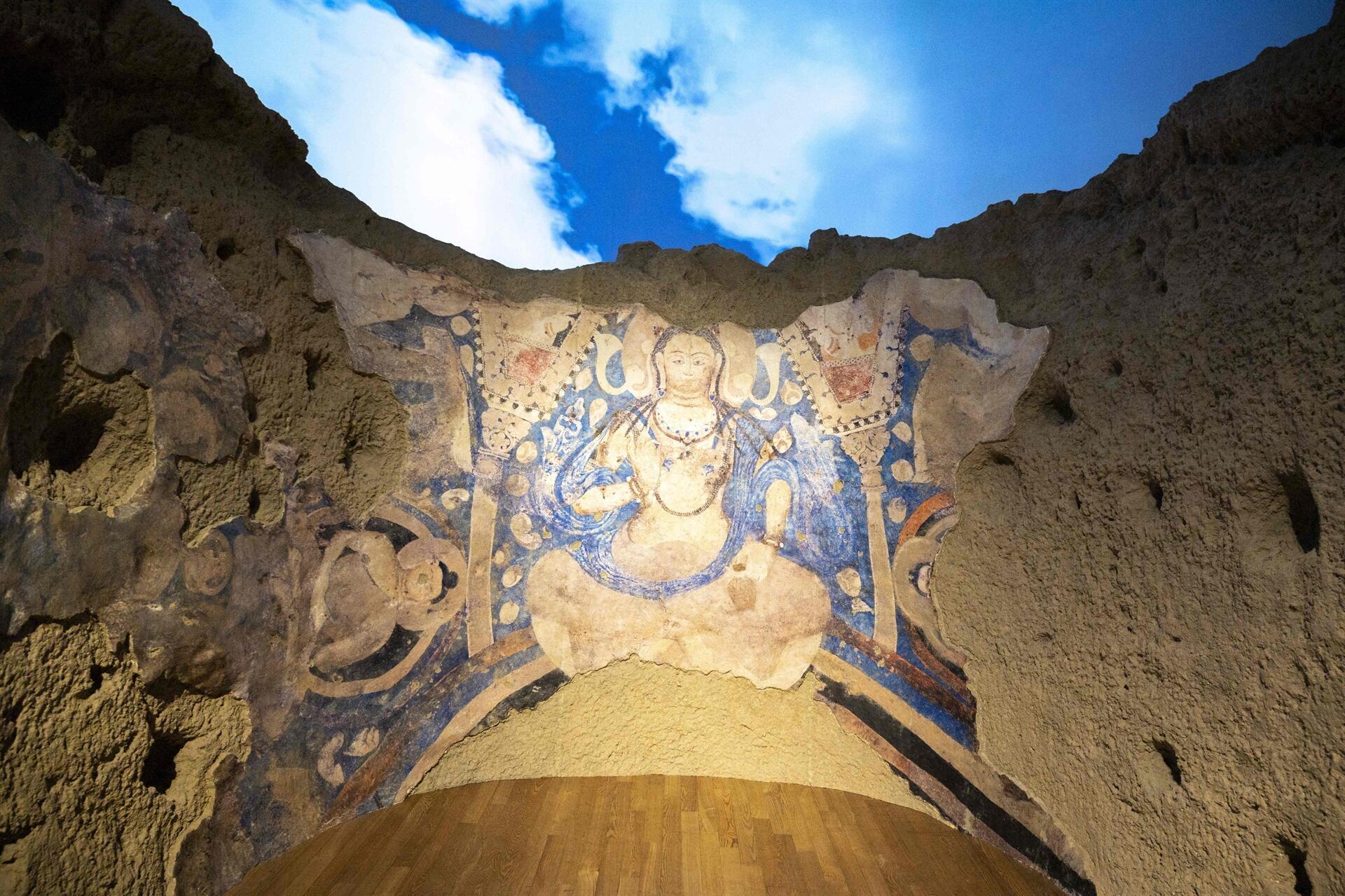 Japanese researchers have crafted a “super clone” of an Afghan mural destroyed by the Taliban, using a mix of traditional and digital techniques that they hope will salvage the work’s “spirit” for future generations.

Not a single fragment remains of the seventh-century cave painting demolished in 2001 along with two massive Buddha statues and other artifacts in Afghanistan’s Bamiyan valley, sparking global condemnation.

But a precise replica, the result of three years of state-of-the-art reproduction efforts, went on display at a museum in Tokyo in September and October, just weeks after the Taliban returned to power in Kabul.

The mural on the ceiling of a cave near the famous statues depicted a blue Bodhisattva – or someone on the path to becoming a Buddha.

At six meters long and three meters high (20 by 10 feet), the intricate full-size copy has been dubbed a “super clone” by the reproduction team at Tokyo University of the Arts.

“We have succeeded in recreating a very precise representation in three dimensions,” from its texture to the type of paint, said the team’s co-leader Takashi Inoue.

Japan is a major donor to Afghanistan and has long been involved in heritage protection efforts at Bamiyan, a crossroads of ancient civilisations considered to be one of the birthplaces of Japanese Buddhism.

The team digitally processed more than 100 photographs taken by Japanese archaeologists of the mural before it was desecrated, to create a computerised model of its surface.

They then fed this data into a machine, which carved the exact shape into a styrofoam block.

To complete the replica, artists applied a traditional paint in a lapis lazuli shade similar to the one used for the original mural.

Through this process, “we can reproduce designs that are very close to the real ones again and again, to hand down their spirit to future generations,” said Inoue, a professor specialising in Eurasian cultural heritage.

Days ahead of the withdrawal of U.S. forces from Afghanistan in August, the Taliban overran Kabul, sparking fears of a return to their brutal reign of 1996 to 2001.

The new regime insists it wants to protect archaeological heritage from destruction.

For historian Kosaku Maeda, a co-leader of the Tokyo reproduction team, the “massively shocking” images of the giant Buddhas disappearing into clouds of dust are still a vivid memory.

“I was worried that such an act would be inflicted on the remains once again,” said the 88-year-old, who has visited the valley repeatedly for more than half a century.

But their work shows that vandalism is “meaningless” in the face of modern technology, as “everything can be digitalized”, he said.

On a recent visit to Bamiyan by AFP journalists, Taliban gunmen stood guarding the rock cavities that once housed the two Buddha statues.

Construction work on a $20-million UNESCO-backed cultural centre and museum was still under way in Bamiyan when the AFP team visited the area in October – although its planned inauguration this year was delayed by the Taliban takeover.

Maeda said his dream is to build a separate “peace museum” in the valley and, if possible, display the replica cave painting there.

“We can’t put it back in its original place, but I want to bring it to Bamiyan as a historical legacy that local people can inherit,” said Maeda, also a member of UNESCO’s committee for the safeguarding of Afghan cultural heritage.

“A nation stays alive when its culture stays alive,” he added, reciting the message written on a banner hung at the entrance of the National Museum of Afghanistan in Kabul.