Taliban leaders “are institutionalizing large scale and systematic gender-based discrimination and violence” against women, the experts said in a statement issued by the Office of the U.N. High Commissioner for Human Rights.

The experts reiterated their alarm at a series of restrictive measures, particularly those concerning women and girls, that the Taliban have introduced since seizing power last August. “Taken together, these policies constitute a collective punishment of women and girls, grounded on gender-based bias and harmful practices,” the experts said. 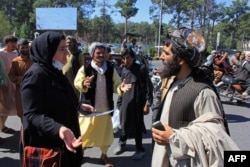 The Taliban have barred most Afghan women from returning to their jobs, ordered taxi drivers to offer rides only to those female passengers wearing hijabs, required a male relative to accompany women traveling further than 72 kilometers, and imposed a strict dress code on women and girls.

“In addition to severely limiting their freedom of movement, expression and association, and their participation in public and political affairs, these policies have also affected the ability of women to work and to make a living, pushing them further into poverty,” the experts said.

The majority of girls’ secondary schools remain closed across Afghanistan.

Taliban leaders have said they hope to be able to allow all girls to go back to school following the Afghan new year, which starts in early March. They say challenges such as paying salaries to teachers and ensuring a safe environment for female students in line with Islamic teachings are causing the delay.

The AP Interview: Taliban Pledge All Girls in Schools Soon

“We respect women’s rights but require them to observe hijab,” Suhail Shaheen, the Taliban permanent representative-designate to the U.N., told VOA.

Critics continue to question the integrity of Taliban pledges concerning girls and schools. 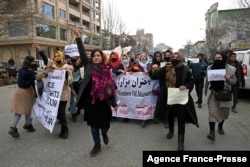 FILE – Afghan women march as they chant slogans and hold banners during a women’s rights protest in Kabul, Jan. 16, 2022.

“We are also deeply troubled by the harsh manner with which the de facto authorities have responded to Afghan women and girls claiming their fundamental rights, with reports of peaceful protesters having been often beaten, ill-treated, threatened, and in confirmed instances detained arbitrarily,” the experts said.

Women have routinely taken to the streets in Kabul and other cities to protest Taliban rollbacks of their rights. Taliban forces at times have used violence to disperse these protests and banned unsanctioned demonstrations.

On Sunday, Taliban police fired pepper spray at a group of about 20 women who protested in the Afghan capital, decrying restrictions on their rights, including the mandatory hijab, participants alleged. During the rally, protesters set fire to a burqa or veil the Taliban’s ministry for Islamic guidance has mandated for women.

The Ministry of Promotion of Virtue and Prevention of Vice responded by warning that the Islamic holy book, the Quran, has ordered Muslim women to wear the hijab.

“Opposing hijab is in fact opposing the Quranic commandment and the Prophet’s teachings. We request our Muslim sisters to not be influenced by foreigners and to not encourage the opposition of hijab,” the ministry asserted in a tweeted statement, referring to the Prophet Muhammad.

Critics such as Heather Barr at Human Rights Watch questioned the Taliban assertions.

“The obsession with how women dress has often been the least of their concerns, but it is indicative of the Taliban’s desire to dictate and restrict every aspect of women’s lives,” Barr told VOA. 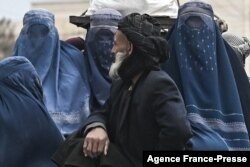 FILE – An Afghan man along with Buqra clad Afghan women ride on a vehicle along a road in Mazar-i-Sharif on Dec. 21, 2021.

“The Taliban seem to believe they are the only people on the planet who fully understand and respect Islam,” she said.

The fundamentalist group’s oppression of women during their previous hold on power in Afghanistan in the 1990s is one of the main reasons the global community has refused to recognize the new government in Kabul and blocked its access to Afghan foreign cash reserves, largely held in the United States.

The financial restrictions and continued sanctions on Taliban leaders have led to the collapse of the Afghan economy and worsened humanitarian upheavals in the conflict-torn country.

The U.N. experts called on the global community to step up urgently needed humanitarian aid for Afghans. They stressed the need to pressure Taliban authorities to ensure that restrictions on the fundamental rights of women and girls are removed immediately.