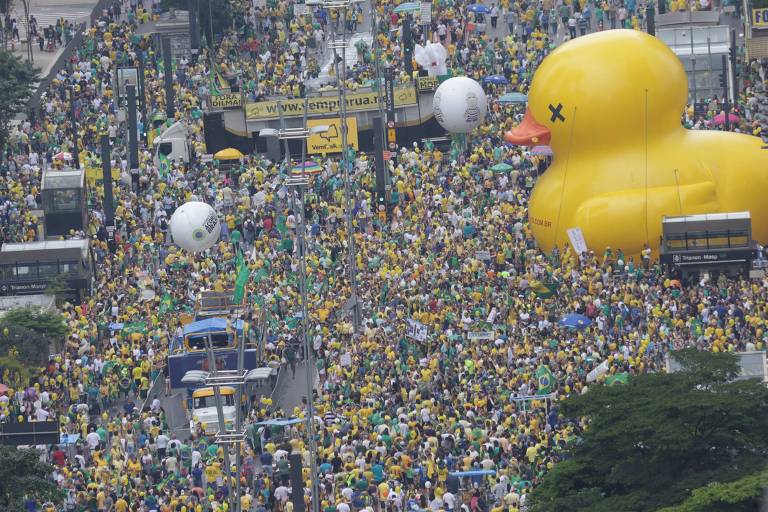 In the flag it represents wealth, in the military dictatorship it served to stimulate pride, in Diretas JÃ¡ it pushed people to the streets to clamor for direct vote and, in Brazil today, it is disputed by detractors and supporters of Jair Bolsonaro.

Yellow has already been used and recycled as a symbol in different contexts of national politics, now associated with the establishment, now with contestation.

Color (which, combined with green, is synonymous with Brazil anywhere in the world) is at the center of a war that pits civil society movements that defend democracy against groups loyal to Bolsonaro.

While the second group takes to the streets in yellow and proudly displays the national flag and sings anthem, sectors critical of the government want these items returned to Brazil as common goods.

âWhen the Bolsonaristas take ownership of these symbols, they are able to reinforce a false narrative that they are the true Braziliansâ, said the writer Antonio Prata, one of the organizers of Somos Juntos, a democracy manifesto that has amassed more than 283 thousand signatures.

The movement, launched in May, adopted yellow as its official color.

âWe have to make this rescue. Just as we need to embrace the flag and sing our hymn again. Who said that the hymn is exclusive to Bolsonarism?,â added Prata, who is a columnist for Folha.

The proposal is endorsed by members of soccer team fan clubs who, together with the Somos Democracia movement, gained space in recent weeks with self-styled anti-fascist protests.

Danilo Bird, leader of the group, said in a video calling for the protests that part of society now has disgust for the green and yellow “due to their appropriation by intolerant, racist, fascist groups.”

To understand the recent yellowish wave between right-wing forces, it is necessary to go back to 2014, when demonstrations against Dilma Rousseff (PT) broke out, later turned into pro-impeachment marches.

Vem pra Rua, one of the organizations that launched the protests, initially used orange, but had to change it, according to founder RogÃ©rio Checker, because on screens it was confused with red. âIn the first video we posted, they called us PT’s,â he said, in reference to the Worker’s party’s red tone.

âThen we debated that the color should have to do with the flag, with the country. Soon, yellow, âhe explained. The fact that participants started showing up wearing the national team’s t-shirt was a coincidence, said Checker.

âIn 2014 there was the World Cup. I think it was easier for people to have a national team shirt at home than other clothes of the same shade,â he said. Fashion caught on and later began to be encouraged by the adherents of the anti-PT and pro-Lava Jato marches.

Packed by the chorus of âour flag will never be red,â protesters and organizers turned yellow, in a chromatic sense. Movimento Brasil Livre, another promoter of the protests against Dilma, poured color on the promotional materials.

The inflatable duck installed at that time on Avenida Paulista was also dyed yellow as a campaign avatar of the Federation of Industries of the State of SÃ£o Paulo against the increase in taxes.

The context helped pave Bolsonaro’s election in 2018, as the presidential candidate embraced agendas dear to those dissatisfied, such as anti-petism and the fight against corruption.

Predominant even today in pro-government protests, the colors have accompanied Bolsonaro since the campaign. The shirt he was wearing was yellow when he was stabbed in Juiz de Fora (MG).

But the debate about appropriation and reinvention of color is much older. It dates back to the construction of the national pavilion, as explained by historian and anthropologist Lilia Schwarcz.

âWith each re-reading of the flag, the center was changed, but the colors remained the same. Originally, the yellow symbolized the Habsburg-Lorraine imperial house. With Independence, to erase imperial houses, the color came to mean wealth, gold. And that sense was ratified in the Republic,â she said.

According to the USP professor, the official tones were evoked in countless other moments. She mentions the First Reign (1822-31), with Dom Pedro I encouraging the use of colors by the population, and the integralist movement, in the 1930s, which incorporated green and yellow into uniforms.

âBut nothing compares, in terms of scale, to what was done by the dictatorship. Then that patriot became, with the idea that this is a country that goes forward, the thing of loving him or leaving him. It is typical of dictatorial governments to appeal to this discourse, to hijack national symbols,â she said.

In the case of the military regime, âkidnappingâ also advanced through football, with the political use that the government of EmÃ­lio Garrastazu MÃ©dici (1969-1974) made of the selection campaign in the 1970 World Cup.

It would seem obvious, after that, that an initiative contrary to the military regime would seek any other shade. But the Diretas JÃ¡ campaign in 1984 did the opposite: it turned yellow and decided to reinterpret it.

âRescuing that color was one of the first things we did,â recalls singer FafÃ¡ de BelÃ©m, who participated in the movement and made history by singing the national anthem at the rallies.

âThe dictatorship had appropriated our native symbols and we were ashamed of them, in a conscious or unconscious way,â continued FafÃ¡, who remembers wearing âa necklace of an intense yellowâ on the platforms. “It was beautiful to see all these people in the same vibe.”

The idea of defining a single tone for the campaign is attributed to Caio Graco Prado (1932-1992), owner of the Brasiliense publisher. Prado told Folha in 1984 that he was inspired by demonstrations in the Philippines against then President Ferdinand Marcos, which were marked by the striking color.

It was part of the strategy to encourage people to use some yellow piece on a daily basis, as a sign of engagement on the agenda. It could be a T-shirt, a brooch, a scarf around the neck, a ribbon on the wrist.

Folha also joined. In an editorial published in February 1984, entitled âYellow, yesâ, the newspaper extolled the importance of symbolism for the movement to continue. From April onwards, he started to bring a yellow stripe on the front page, accompanied by the phrase: âUse yellow for the direct-alreadyâ.

The amendment that proposed direct voting ended up being rejected in Congress, and the presidential election would only take place in 1989, with the victory of Fernando Collor de Mello.

Through Collor’s hands, yellow returned to the political scene in August 1992.

The target of accusations of corruption, he made a request: that the Brazilians leave the house with a piece of clothing in any of the colors of the flag. On the agreed day, the majority of the population wore black, in protest.