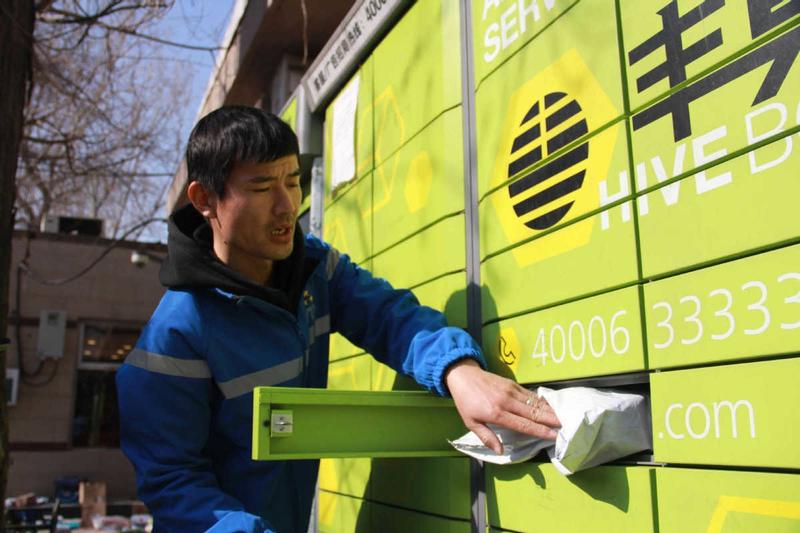 Courier Chen Bin, 36, was busy sorting and delivering parcels in Beijing’s Dongcheng district on Lunar New Year’s Eve when he experienced a spontaneous act of generosity.

“Chen Bin, I will bring you some kombu (kelp) later to make soup,” said an elderly customer he encountered at a residential block.

The delivery driver declined the offer saying he had plenty of food to eat, but it is the sort of exchange that usually only happens between close friends and family members.

Chen has worked for ZTO Express－a leading courier company－for more than six years, and this year was the first time he had spent the Spring Festival holiday in Beijing. In the past, he always returned to his hometown in Pucheng county, Shaanxi province, to celebrate with family and friends.

Although I’m tired, I’ve never thought of quitting the courier sector. I like my job and get along well with my customers.

However, this year he stayed at work in response to authorities’ calls to reduce unnecessary travel to minimize any possible spread of COVID-19.

“We needed more manpower to cater to the surging demand for delivery services in the capital before the festival, and I didn’t want to put pressure on the COVID-19 prevention work in my home village,” Chen said.

From Jan 1 to Feb 7, the courier sector delivered 10 billion parcels nationwide, a record according to the State Post Bureau. In the week before Lunar New Year’s Eve, Chen handled more than 300 parcels a day, twice the quantity of last year.

Chen typically works 12-hour shifts six or seven days a week and earns an average monthly income of 15,000 yuan (US$2,320), much higher than the 2019 per capita monthly income for employed population of about 8,850 yuan, according to the Beijing Municipal Bureau Statistics.

ZTO Express offered incentives to couriers who worked from Feb 8 to Feb 18 by tripling their normal delivery fee from 1 yuan to 3 yuan per parcel.

Chen said his family supported his decision to stay in Beijing and he had a video chat with them on Feb 11. “It wasn’t too bad. They celebrated the festival at home and I worked here to earn money for them,” he said.

His family has bought a new house with the money he has sent home. “I just paid off the decorations for the house and my wife’s Huabei (a virtual credit card product of Alibaba),” Chen said proudly.

Of 31 delivery workers at his station, Chen is the only one recognized as a five-star employee for the volume and quality of his work.

Ju Yongkang, owner of ZTO’s Second Ring Road delivery station, said Chen is friendly with many customers and has a good reputation.

“He is widely recognized by residents in the area. They are satisfied with his service and often give high marks and positive comments on online platforms,” said Ju, who also manages the station.

Chen has about 6,000 WeChat contacts. Most of them are his customers who live in 60 buildings in the Andeli community that he covers. The majority of them greet him by name and some generous ones sometimes offer him food and drink.

“I don’t have enough room in my dormitory to put the stuff,” he said. “They also give me books their children have finished reading, which I send to my daughter back home.”

Chen knows the names of most of his regular customers and some of their cellphone numbers. When a resident he knows approaches him to collect a parcel, he quickly retrieves it from his van and hands it to them before they can ask for it.

Some customers sending parcels simply leave them outside their doors and forward the delivery details to Chen via WeChat, which he fills in. The process is more convenient as the customers don’t have to hand the packages to Chen in person. He earns 3 yuan for each package he sends, a major boost to his income.

Residents in the communities his route covers praised him for being responsible and trustworthy and said he is the hardest working deliveryman among his peers.

Although Chen didn’t return home for Spring Festival he plans to invite his wife and 4-year-old daughter to Beijing when the epidemic situation is under even greater control.

“Although I’m tired, I’ve never thought of quitting the courier sector. I like my job and get along well with my customers,” he said.