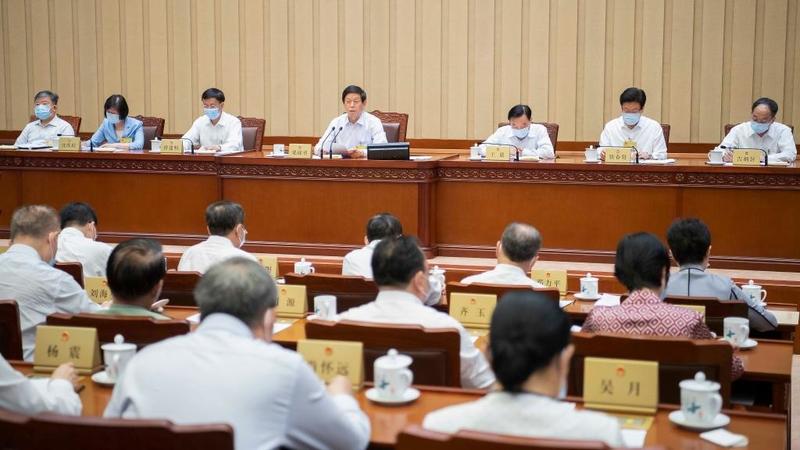 Li Zhanshu (center), chairman of the National People’s Congress (NPC) Standing Committee, presides over the closing meeting of the 29th session of the 13th NPC Standing Committee at the Great Hall of the People in Beijing, capital of China, June 10, 2021. (LI TAO / XINHUA)

After a second deliberation, the Standing Committee of the National People’s Congress, the nation’s top legislature, adopted the law on countering foreign sanctions when it concluded its session.

Li Zhanshu, chairman of the NPC Standing Committee, said the law on countering foreign sanctions is an important step in implementing Xi Jinping Thought on Rule of Law and on Diplomacy and accelerating legislation involving foreign affairs

Li Zhanshu, chairman of the NPC Standing Committee, presided over the closing meeting and said the law is an important step in implementing Xi Jinping Thought on Rule of Law and on Diplomacy and accelerating legislation involving foreign affairs.

“China has always adhered to an independent foreign policy of peace and is committed to pursuing mutual benefits and common growth with other countries,” Li said. “But we never give up our legitimate rights and interests. No one should expect China to accept any action that damages its own interests.

“The Chinese government and people resolutely oppose any sanctions and interference,” he added.

The top legislature followed international practice to make and review the law, he said, noting that the law provides legal support not only to counter hegemony and power politics, but also to protect the interests of the country and people.

While emphasizing that the law should be fully and accurately understood and needed to be promptly applied to fight against sanctions, he also called for the acceleration of legislation relating to foreign affairs in order to better safeguard China’s sovereignty, security and development interests.

According to the 16-article law, relevant departments of the State Council can decide to put foreign individuals or organizations on a sanctions list if they find them to have violated international law and basic norms of international relations, used various excuses or their own laws to contain or suppress China, taken discriminatory restrictive measures against Chinese citizens or organizations, or interfered in China’s internal affairs. The countermeasures for those on the list include denial of visa issuance, denial of entry into China, cancellation of a visa or expulsion from the country, the law said.

The Legislative Affairs Commission of the NPC Standing Committee said in a statement on Thursday that drafting, reviewing and passing such a law in a short time met an urgent need to counter the hegemony and power politics of some Western countries as well as to safeguard China’s sovereignty, security and development interests. It also will promote the rule of law at home and abroad in a coordinated way.

The law is of great practical and long-term significance, the commission said, adding that it will effectively improve China’s legal capabilities in dealing with external risks and challenges and accelerate the formation of a comprehensive legal system involving foreign affairs.

The Legislative Affairs Commission of the NPC Standing Committee clarified that the law will not affect China’s opening-up, adding that the country’s determination to deepen reforms and open wider to the world is unshakable

It clarified that the law will not affect China’s opening-up, adding that the country’s determination to deepen reforms and open wider to the world is unshakable, as is its determination to safeguard its national sovereignty, security and development interests.

Besides the law, China has similar anti-sanctions measures in some current laws, such as a law on export control, and its legislation on opening-up has also been speeded up in recent years, according to the commission.

Li Qingming, an associate professor at the Institute of International Law of the China Academy of Social Sciences, said that the law was a major step forward in strengthening the rule of law in legislation concerning foreign affairs, saying that it provides a stronger legal basis for China in fighting the discriminatory measures of foreign nations.

Huo Zhengxin, a law professor from the School of International Law at China University of Political Science and Law, said, “When we fought against foreign sanctions in the past, this was mainly with administrative or economic measures, but now we have legal support against such behavior.”

Meanwhile, the law implements a major task set out in the NPC Standing Committee’s annual work report released in March, which was to upgrade the legal toolkit for meeting challenges and guarding against risks in order to oppose foreign sanctions, interference and long-arm jurisdiction, he said.

Both legal experts said foreign investors have no need to worry about the Chinese business environment after the law was adopted.

“The target of the legislation has never been those coming to invest and develop in proper ways,” said Li Qingming. “Investors will not be affected, as China will continue promoting a market-oriented, sound, international and legal business environment to ensure liberalization in trade and investment.”

Huo agreed, saying that China’s determination in opening-up, the path of peaceful development and its will to embrace economic globalization will not change and China will also give stronger legal support to investors.