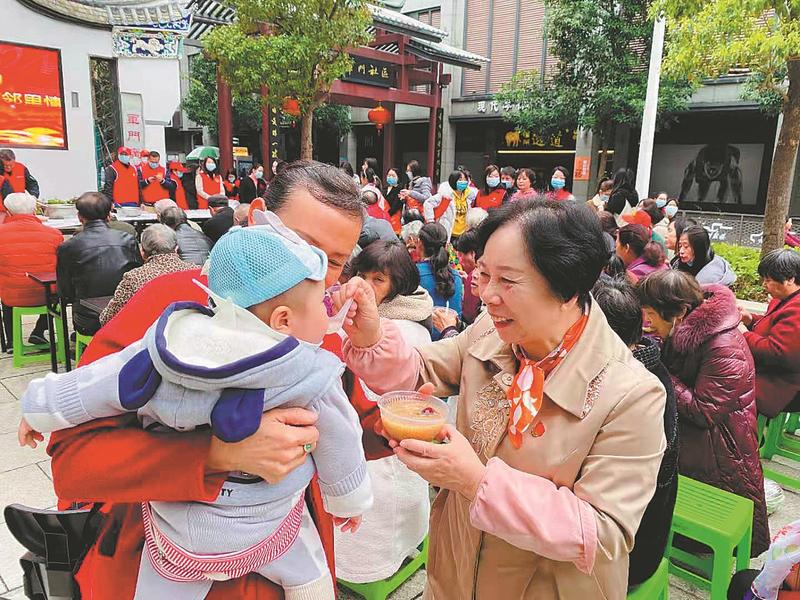 Lin Dan, Party chief of Junmen community in Fuzhou, Fujian province, helps a mother feed her child during a gathering at the community on March 10. (PHOTO PROVIDED TO CHINA DAILY)

Each day at 6 am, Lin Dan prepares breakfast, lunch and dinner for her husband. She does so to make up for her lack of time with him.

Now Party chief of the Junmen community in Fuzhou, Fujian province, the 72-year-old started working there as a staff member when she was 22.

“Working in a residential community is not something very big, but every aspect of my job matters to people’s well-being,” Lin said. “The community work generally focuses on the elderly and young, and it’s something that we should do with all our heart.”

A senior widow surnamed Wu had been living alone for years. Lin took care of her daily needs from 1994 until Wu died in 2003. Lin managed her funeral.

The desire to do my best drives me to explore more work methods. I have a pen and notebook by my bed, and when I get new ideas from TV and newspapers, I jot them down and apply them to my community.

In 1991, a resident surnamed Wang was imprisoned for eight years for theft. His mother died during that time, and their rented house was taken back by the landlord. Lin took Wang in after he was released, and he lived with her for half a year.

Xie Rong, deputy Party chief of the community, said Lin often says that community workers are the daughters and sons of all the senior residents.

“She treats them as family members,” Xie said.

Li Xing, a resident, said Lin has visited his home several times. “She is not doing it just for show. She treats everyone genuinely,” he said.

Lin said she is motivated by her ambitions.

“The desire to do my best drives me to explore more work methods. I have a pen and notebook by my bed, and when I get new ideas from TV and newspapers, I jot them down and apply them to my community,” she said.

In 2009, she led efforts to set up an elder care center that would go on to house 60 seniors, as well as a tutoring center run by volunteers, who pick up children whose parents are working and help them with their homework after school.

Lin also made helpful items, including a card with her phone number so people could contact her and a card offering helpful tips to the residents. She also records the work she does for the people in her diary.

She often uses her own salary to help children from poor families pay school fees. She took the lead to pair with a family listed as impoverished to subsidize them every month.

Junmen has completely shrugged off poverty, and its work model has been promoted throughout the country.

In 2014, the Lin Dan community work and training base was established in Junmen, and has attracted about 280 community workers from Fujian and other regions to study since then.

Lin has been awarded the National Outstanding Community Worker and National Model Worker.

She became one of 29 people who received the July 1 Medal conferred by the Communist Party of China Central Committee to outstanding members.

“There is no best, only better in terms of community work,” Lin said. “To do community work, we must first learn to be human beings and serve other people. Community workers are not managers, but residents’ attendants.”

Since 1980, Lin has employed a housekeeper to help with her housework. Her mother, in her 90s, is living in a nursing home due to Lin’s community work.

“I want to be an attendant for the whole community, not an official. One who treats himself or herself as an official will not stay in the position for long.

“What I fear the most is that I am growing older, and I won’t be able to serve the residents any more some day,” she said.

Yang Jie contributed to this story.