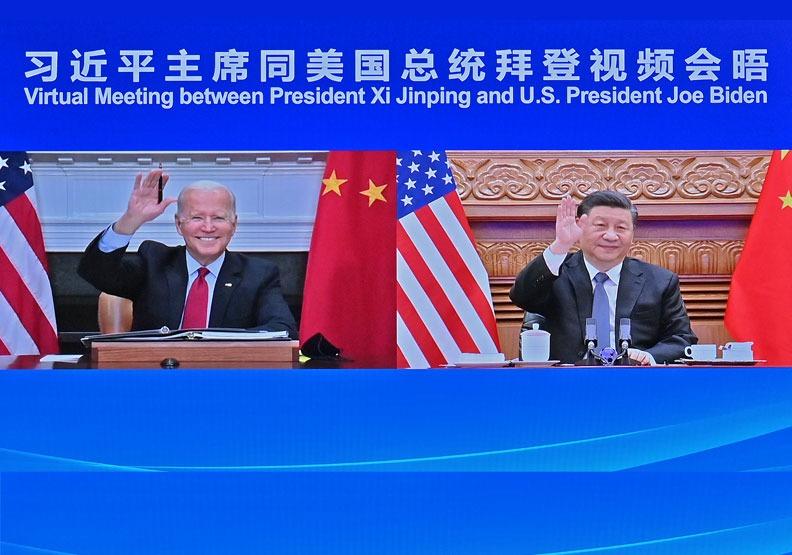 President Xi Jinping in Beijing meets with US President Joe Biden via video link on Tuesday. President Xi attaches great importance to the China-US relationship and has been consistently pushing for its sound and steady development. (PHOTO / XINHUA)

The virtual meeting between President Xi Jinping and US President Joe Biden on Tuesday will help reduce tensions and open up more space for bilateral cooperation between the world’s two largest economies, according to international relations experts.

Carl Bildt, co-chair of the European Council on Foreign Relations, said on Wednesday in a tweet, “It looks as if the Biden-Xi meeting has put some ‘guardrails’ on the ‘responsible competition'” between the two countries, and even opened the door to more cooperation and dialogue on key issues.

“That’s all to be welcomed,” he said.

“I guess both the US and China are seeking to make their competitive relationship more predictable, opening up also for necessary cooperation in key areas like climate,” Bildt, a former Swedish prime minister, had tweeted on Tuesday.

At the 26th United Nations Climate Change Conference of the Parties, or COP 26, which ended in Glasgow last week, China and the US surprised many by announcing a joint declaration to work together to fight climate change.

Andrey Karneev, head of the School of Asian Studies at the Moscow-based Higher School of Economics, described the intention of the meeting as “to reduce tensions and agree on regular contacts”.

“There are areas of the relationship where the prospect of finding a common approach is favorable. Such areas include climate change, the fight against the coronavirus and ensuring sustainability in the energy sector,” he said.

Harneev said he expects some progress in trade and economic ties, since Biden is facing a difficult domestic economic situation, including high inflation and a shortage of goods due to supply chain disruption.

Yuri Tavrovsky, head of the Expert Council of the Russian-Chinese Committee for Friendship, Peace and Development, said:”Apparently it was a very substantial discussion. Otherwise it wouldn’t last for three-and-a-half hours.”

Junichiro Kusumoto, a professor on the faculty of law at Toyo University in Japan, said: “Frictions between China and the United States are not irrelevant to Japan, and I just hope that everything will be resolved peacefully.”

Kusumoto added that the US-China relationship will have a significant impact on the geopolitical situation in East Asia.

Kinji Matsuo, a philosopher and author in Japan, said the world is concerned about how China and the US will deal with their differences.

“It is like two surgeons treating one wound at the same time. Are they going to cooperate well, or do they need a third person to help? We are looking forward to the answers,” Matsuo said.

Gayle Allard, a professor of economics at IE University in Spain, noting that the US-China relationship is at its worst since the 1970s, said,”It is always a step forward when leaders meet and talk, even if it is virtually, as the two presidents have done.”

Felix Valdivieso, chairman of IE University’s IE China Center, said, “The conversation between the two presidents was… necessary, fruitful and continuous.” He added that this was perhaps the result of the two presidents knowing each other well, having maintained a good relationship since both were vice-presidents.

David Shullman, senior director of the Atlantic Council’s Global China Hub, said the virtual meeting was “critical to minimizing misperception and the risk of unintended conflict”.

Wang Xu in Tokyo and Liu Hongjie and Chen Yingqun in Beijing contributed to this story.