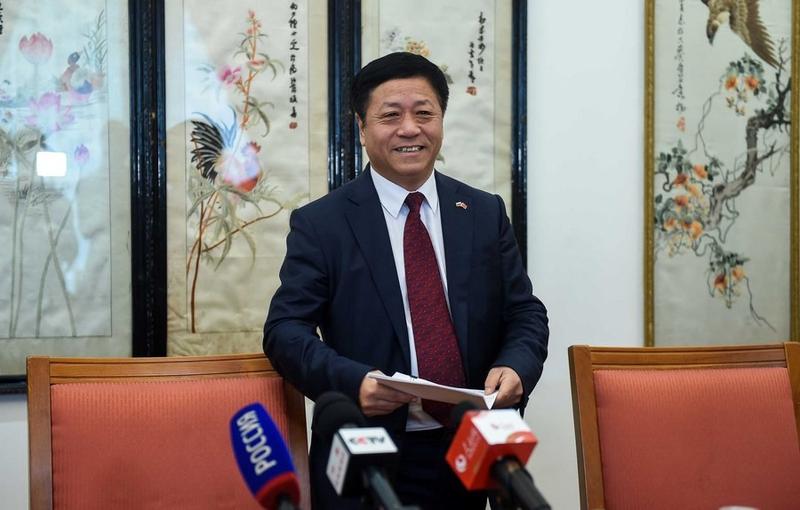 China has adhered to the principles of openness, transparency and cooperation from the very beginning in investigating the origins of the coronavirus, and has twice invited experts from the World Health Organization to visit China in support of this task, said Zhang Hanhui, the Chinese ambassador to Russia.

The United States, while closely studying the situation in other countries, has been hiding what has taken place at home, Zhang said in an interview with Russia’s Interfax news agency recently.

A joint mission from China and the WHO, which examined the origins of the virus that causes COVID-19, released a report in March that drew the clear conclusion that a laboratory leak was extremely unlikely.

The US, regardless of the facts, has tried to cast doubts on the views of scientists with conspiracy theories created by its intelligence officers, thereby politicizing the issue, Zhang said.

The US has recently increased the pressure on the WHO and its director-general, Tedros Adhanom Ghebreyesus, in pushing for so-called independent and transparent investigations, Zhang said. The aim is to slander China by any means possible, the diplomat said.

The investigations into the origins of the coronavirus should be based on science and the facts, and they should also be carried out in many countries at the same time, Zhang said.

“If the US really strives for truth and transparency, it should agree to start an international investigation to identify the source of the epidemic on US soil, and the reasons for its ineffective fight against the COVID-19, as well as to answer existing questions related to the testing ground for biological experiments in the US itself,” Zhang said.

The US has constantly discredited China’s international image by resorting to the spreading of false information and fake news, the ambassador said.

Zhang said that Sino-US relations have gone off the right path, and are now experiencing the most difficult stage since the establishment of diplomatic ties. The main reason, he said, is that the previous US administration adhered to the outdated thinking associated with a zero-sum game.

Based on its own political needs, the administration of Donald Trump mistakenly made assessments based on misinterpretations of China’s development direction and policies. It exerted pressure on China through various measures, and these actions caused serious damage to relations between the countries, Zhang said.

After the administration of President Joe Biden took over in January, Chinese President Xi Jinping and Biden held important talks by phone on the eve of the Chinese New Year, which outlined the general direction of relations between the two countries, the diplomat said.

“However at the same time, we also note that the new US administration treats China as the ‘most serious rival’ and continues to grossly interfere in China’s internal affairs on issues related to Taiwan, Xinjiang and Hong Kong,” Zhang said.

Zhang said this year marks the 50th anniversary of Henry Kissinger’s secret visit to China, paving the way for diplomatic ties between the US and China. However, “it seems the US policy toward China has not yet emerged from the shadow of the policy of the previous administration”, the diplomat said.

Zhang said: “We strongly urge the US to learn from history, correct the mistakes it made earlier, learn to peacefully coexist with countries with different histories, cultures and other ways of development, adhere to a constructive policy toward China, eliminate differences and return Sino-US relations to the path of healthy and stable development.

“History has proved that cooperation between China and the US is mutually beneficial, and that confrontation, on the contrary, harms the two countries.”