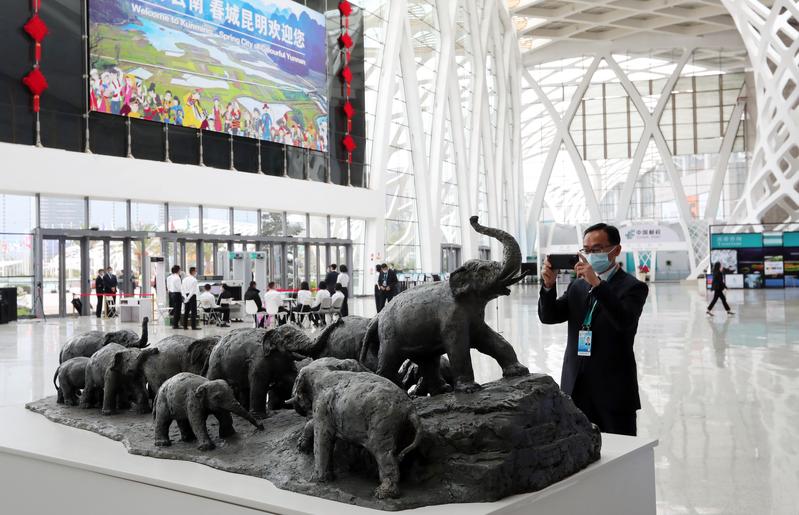 A visitor takes a picture of a sculpture featuring 15 elephants at the Dianchi Convention and Exhibition Center in Kunming, Yunnan province, on Sunday. Inspired by the 15 elephants wandering in the province several months ago, sculptor Yuan Xikun created the work and donated it to the COP 15 conference, which is being held at the center from Monday to Friday. (YANG ZHENG / FOR CHINA DAILY)

With most of the world’s biodiversity targets for the past decade unfulfilled, the world’s eyes are on China for an ambitious and achievable post-2020 global framework as it hosts a key United Nations biodiversity summit.

Bearing historical lessons in mind, besides setting up protected lands, parties to the UN Convention on Biological Diversity should attach more importance to the mobilization of all sectors of society to participate in biodiversity conservation, experts said.

They also stressed the importance of assisting poor nations that boast rich biodiversity but weak conservation capabilities, saying global targets cannot be fulfilled without such states being supported financially and technologically.

The world’s biggest biodiversity meeting in a decade, the COP 15 UN biodiversity conference will be held in Kunming, capital of Southwest China’s Yunnan province, from Monday to Friday, with a second session to be held in the first half of next year.

The biennial gathering was originally scheduled to be held in October last year but was postponed due to the COVID-19 pandemic. The summit is tasked with considering the post-2020 global biodiversity framework, the first draft of which was released in July, and identifying protection goals through 2030.

The Chinese government has stressed on various occasions that the country aims to facilitate the adoption of an ambitious, balanced and realistic post-2020 global biodiversity framework at the Kunming gathering.

In an open letter to International Union for Conservation of Nature members early last month, Elizabeth Maruma Mrema, executive secretary of the Convention on Biological Diversity, said that “agreeing on a post-2020 global biodiversity framework can play a significant role in building the necessary resilience”.

The post-2020 framework will build on lessons learned from the Strategic Plan for Biodiversity 2011-20 and its Aichi Biodiversity Targets, which were adopted at COP 10 in Japan in 2010.

“The Aichi Targets, though six were partially achieved, proved that ambition alone is not enough,” she said.

Mrema said that to be successful, an all-hands-on-deck approach is needed, embodied via a framework with an all-of-society and whole-government approach.

“We must also look beyond the usual suspects－indigenous peoples and local communities, businesses, and the financial sector all play a key part in the transformation to a nature-positive future,” she said, adding that civil society, in particular, will continue to play an important role in developing and implementing the framework.

Ma Keping, secretary-general of the biodiversity committee of the Chinese Academy of Sciences, said that what makes the draft post-2020 global biodiversity framework different from previous ones is that it places more emphasis on ecosystem restoration and sustainable production and consumption, while maintaining the traditional stress on protection.

The draft aims to ensure all areas under agriculture, aquaculture and forestry are managed sustainably by 2030, in particular through the conservation and sustainable use of biodiversity, increasing the productivity and resilience of such production systems.

It also aims to see all businesses assess and report on their dependencies and impacts on biodiversity by 2030, as well as to progressively reduce negative impacts by at least half and increase positive impacts.

Ma, one of the scientists who has spearheaded biodiversity research in China, said that only by making production and consumption sustainable can the world reduce the threat to biodiversity, bring resources under effective protection and restore them.

“Simply setting up protected lands doesn’t work. We must motivate even larger participation and throw all walks of life into action,” he said, citing the protection of the crested ibis, an endangered bird known as the “oriental gem”, as an example.

Once thought to be extinct due to human activities, the bird has experienced stable population growth, with its population in China climbing to more than 5,000, according to the National Forestry and Grassland Administration.

Ma said he saw the endangered bird several times on his way to the nature reserve for the species in Yangxian, Shaanxi province, earlier this year. They could be seen in ditches near the road, as well as in the reserve.

“As to the protection of the crested ibis, we cannot only depend on the nature reserve,” he said. “It also needs the farmlands around that to provide them with food.”

While sustainable management of farmlands, featuring the minimal use of chemical fertilizers and pesticides, is important for the species’ survival and restoration, awareness of the importance of protection among nearby residents also matters, he said, adding that without such awareness, the ibis may easily fall victim to hunting.

Ma said the establishment of effective compliance and financial mechanisms are also priorities at COP 15.

There is a growing consensus that biodiversity loss cannot be curbed with only goals and planning, he said, because they cannot be brought into reality without an effective compliance mechanism. “There must be actions,” Ma said.

There should also be a sound financial mechanism that could ensure necessary support for poorer nations’ biodiversity conservation endeavors.

A sound financial mechanism will see contributions not only from government, but also different social sectors, including enterprises, Ma said, adding that it should also be supported by green financing.

Ma’s comments were endorsed by Patrick Giraudoux, professor of ecology at the University of Franche-Comte in France.

The question is what will be done in reality to reverse the decline in biodiversity, Giraudoux said.

“I have no doubt in the political will on biodiversity, which is shared by all people of reason who understand the risk we take by facilitating its erosion. Now, we will have to translate it into facts,” he told Xinhua News Agency.

With lessons learned from the past 10 years, the framework for the next decade will include mechanisms with adequate means to support implementation, such as financial resources, capacity and technology, and place the responsibility for implementing planning, monitoring, reporting and review mechanisms on parties to the convention.

“This vision cannot be achieved by one country, one ministry or one economic sector alone,” Mrema said. “Only by working outside silos and across sectors can we achieve the targets of an ambitious framework and a life in harmony with nature.”