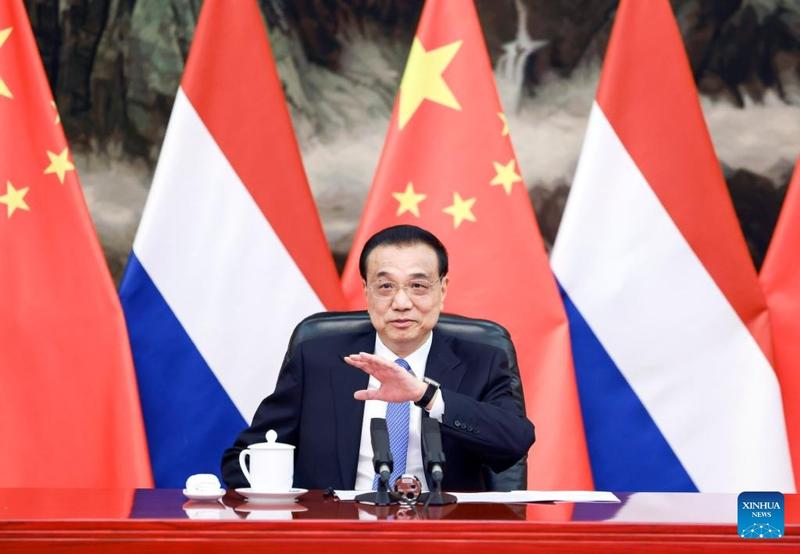 BEIJING- Chinese Premier Li Keqiang said on Wednesday that China stands ready to work with the Netherlands to enhance political mutual trust, advance practical cooperation, strengthen bonds between the people, and push for new progress in their relations.

Li made the remarks during a meeting with Dutch Prime Minister Mark Rutte via video link.

Li once again congratulated Rutte on his reelection as Dutch prime minister.

Noting that the Netherlands is an important cooperative partner of China in Europe, Li said China attaches great importance to developing relations with the Netherlands.

China is ready to take the 50th anniversary of the establishment of diplomatic ties as an opportunity to work with the Netherlands to bring more benefits to the two countries and peoples, Li said.

Pointing out that both China and the Netherlands are committed to multilateralism and free trade, Li said China firmly upholds its opening-up policy and is committed to creating a market-oriented, law-based and international business environment for all Chinese and foreign enterprises registered in China.

Li said China supports the establishment of a China-Netherlands business council as a new platform for business exchanges and cooperation between enterprises of the two countries.

He said China is willing to deepen cooperation with the Netherlands in the fields of climate change, science and technology, modern agriculture and other areas. “We welcome more high-quality Dutch agricultural products to enter the Chinese market,” he added.

Li stressed that China and the EU share broad common interests. The two sides should adhere to dialogue and cooperation, respect each other, treat each other as equals, properly handle disputes and differences, and work for the sound and steady development of China-EU relations.

Li expressed hope that the Netherlands, as an important member of the EU, will play a constructive role in promoting China-EU relations and cooperation.

For his part, Rutte said that the Netherlands and China have carried out constructive cooperation in various fields and there has been sound momentum in the development of bilateral ties.

The Dutch side hopes to deepen exchanges and cooperation in areas including culture, economy, trade, agriculture and the circular economy, said Rutte, adding that the country believes that China will host a successful Winter Olympic Games.

The EU and China need to step up dialogue and cooperation, properly handle differences and jointly respond to global challenges such as the COVID-19 pandemic and climate change, Rutte said.