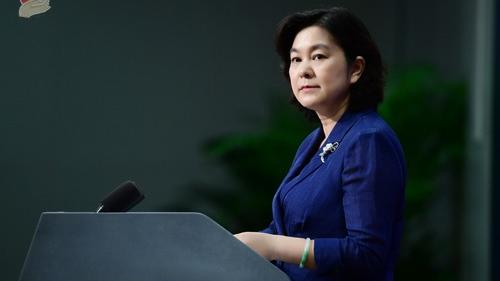 BEIJING – Chinese Foreign Ministry spokesperson Hua Chunying said Wednesday that no matter how Mike Pompeo and his likes lie, deceive or spread hatred and confrontation, people will make the right judgment, and history will make a fair evaluation of the Trump administration.

Hua made the remarks at a press briefing when asked to comment on the result of a pan-European survey released on Tuesday that shows most European people now think the political system of the United States has been broken.

The Chinese side hoped that the new administration of the United States will meet the Chinese side halfway, strengthen dialogue, manage differences, expand cooperation and push China-US ties back to the right track as soon as possible

The survey was commissioned by the European Council on Foreign Relations in 11 countries.

Hua said China has always believed that a good China-US relationship conforms to the fundamental interests of the two peoples and is also the common expectation of the international community.

“Although there are differences between China and the United States, they also have extensive common interests and room for cooperation, as well as special responsibilities for world peace and development,” Hua said.

Hua reiterated China’s policy toward the United States, which is to develop a bilateral relationship featuring no conflict, no confrontation, mutual respect and win-win cooperation.

ALSO READ: What shifting US politics means for China

The Chinese side hoped that the new administration of the United States will meet the Chinese side halfway, strengthen dialogue, manage differences, expand cooperation and push China-US ties back to the right track as soon as possible, so as to better benefit the two peoples and the people of the world, Hua said.

Meanwhile, Hua said Pompeo’s lies and slander on China’s Xinjiang will not change stability and prosperity in the region.

She made the remarks in response to a query on Pompeo’s declaration that the United States determined China engaged in “genocide” and constituted “crimes against humanity” on its Muslim Uygur minority in Xinjiang.

Hua said Pompeo’s assertion is nothing but one of his absurd big lies, and the US politician, notorious for lying and deceit, is turning himself into a clown and the joke of the century with his final madness.

She said China has repeatedly introduced and explained the real situation in Xinjiang and has released eight white papers on Xinjiang so far. The government of Xinjiang Uygur Autonomous Region has held 23 press conferences and indicated that the people of all ethnic groups in Xinjiang live and work in peace, unity and harmony with a large number of figures and examples.

In 2019, Xinjiang received more than 200 million domestic and foreign tourists, and more than 1,200 diplomats, journalists and representatives of religious organizations from more than 100 countries visited Xinjiang, she added.

Over the past 60 years, the average life expectancy has increased from 30 to 72 years old in Xinjiang, the languages, traditional cultures, and customs of the ethnic minorities are well protected and passed on, and the people of all ethnic groups fully enjoy the rights to survival and development, she said.

She stressed that China earnestly implemented the UN Plan of Action to Prevent Violent Extremism in Xinjiang, and adopted preventive counter-terrorism and de-radicalization measures in accordance with the law, which effectively guaranteed the safety and stability of Xinjiang and protected the lives of people of all ethnic groups in the region.

China protects the rights of workers in accordance with the law and makes every effort to provide training and to create jobs for the people of all ethnic groups in Xinjiang, Hua said, adding that the Chinese government has adopted resolute, scientific and decisive measures to protect the lives and health of people of all ethnic groups including the Uyghur in the fight against the COVID-19 pandemic.

Pompeo turned a blind eye to facts, reflecting the attempt of some US forces to smear China and the Communist Party of China, interfere in China’s internal affairs under the guise of human rights and undermine China’s security and stability, she said, adding that the slander and smear cannot affect stability and prosperity in Xinjiang.