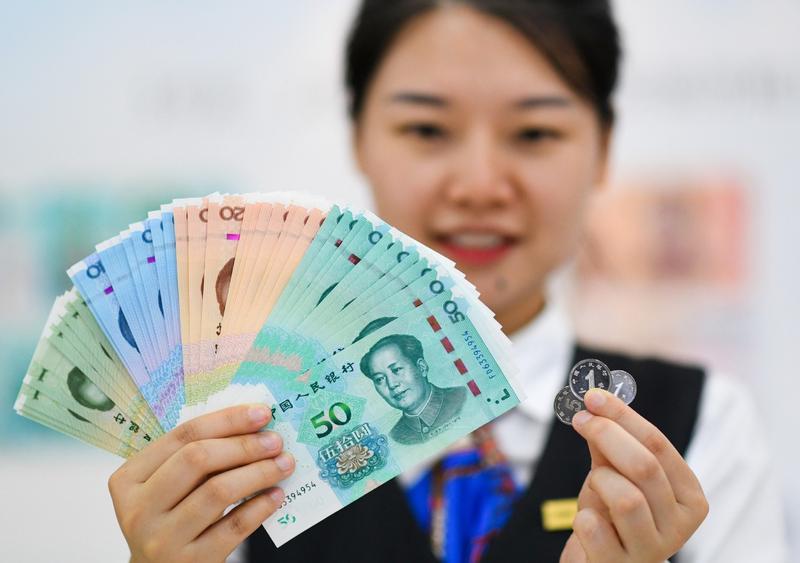 A woman shows banknotes and coins included in the 2019 edition of the fifth series of the renminbi. (PHOTO / XINHUA)

Despite factory-gate inflationary pressure, China is expected to further leverage its monetary policy in the rest of the year by reducing the cash that banks must hold in reserve to bolster the economy, experts said on Thursday.

They commented after the National Bureau of Statistics released a record-high reading of factory-gate inflation on Thursday.

The producer price index, which gauges factory-gate prices, rose 10.7 percent year-on-year last month, up from 9.5 percent in August and marking the highest level since the bureau started releasing the numbers in 1996.

The elevated industrial prices have heated up discussions on how the People’s Bank of China, the nation’s central bank, will balance the policy goals of stabilizing price levels and buffering economic slowdown, as more accommodative monetary conditions risk fueling inflation.

Kang Yong, chief economist at KPMG China, said there remains room for the central bank to strengthen support for the economy by reducing the reserve requirement ratio for some banks to boost lending to small and medium-sized enterprises, clean energy industrial chains and other key areas. The RRR refers to the proportion of funds that banks are required to hold in reserve.

Such a targeted RRR cut will help manufacturers and smaller businesses deal with cost pressure, boost employment and stabilize the industrial chain, while avoiding injecting too much stimulus and boosting inflation, he said, adding that the likelihood of a policy interest rate cut remains relatively small.

“There is indeed a global trend of central banks scaling back stimulus measures, but the central bank can maintain some policy independence as China is at a different stage of recovery and has reserved more policy space,” Kang said.

Chen Yanbin, a professor of economics at Renmin University of China, said the spike in PPI is due to tight supplies of commodities such as coal amid COVID-19-related disruptions, which intensified the cost pressure felt by smaller manufacturers.

Experts said a subdued consumer inflation level also offers the space for China to increase monetary support. The country’s consumer price index, a main gauge of inflation, grew by 0.7 percent year-on-year last month, down from 0.8 percent in August, as food prices dropped due to slumping pork prices, the NBS said.

Wen Bin, chief researcher at China Minsheng Bank, said consumer inflation is expected to remain low due to falling food prices, and the policy mix to stabilize commodity supplies will be strengthened and gradually take effect.

“Overall, inflationary pressure curtails monetary policy space only in a limited way at present,” Wen said. “But inflationary risks may intensify as the economic recovery in and out of China has become increasingly uneven.”

Thursday’s readings came amid rising concerns that inflationary pressure could persist globally due to energy shortages and disrupted supply chains. While a tight supply of coal and the restricted capacity of energy-intensive industries have pushed China’s PPI growth to a record high, September’s CPI growth in the United States also remained elevated at 5.4 percent year-on-year.

Chen from Renmin University of China said the spike in energy prices shows that the policy goals of stabilizing energy supplies and reducing energy consumption can be better coordinated.