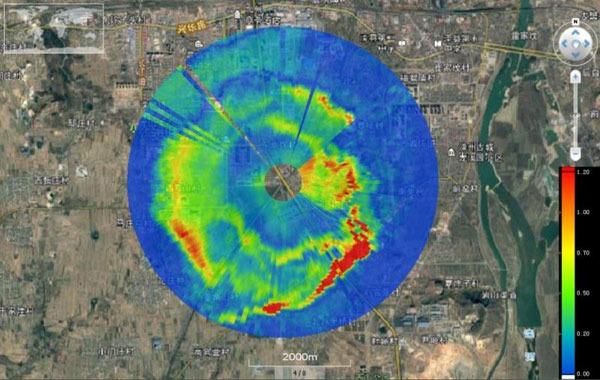 A spectrum is generated based on data sent back by LiDAR to show the concentration of air pollutants in a certain area. Blue suggests low concentrations, while red suggests high. (PHOTO PROVIDED TO CHINADAILY.COM.CN)

BEIJING – China is planning to launch a new satellite mounted with a LiDAR (light detection and ranging) system to monitor CO2 in the atmosphere, a senior meteorologist said.

The world’s first satellite actively sensing CO2 with the LiDAR technology, the new satellite will be ready for launch in July, said Zhang Xingying, a senior researcher with the National Satellite Meteorological Center, in an interview with Xinhua.

China has put three satellites in orbit for CO2 monitoring and study since 2016, and they are all equipped with passive optical remote-sensing technology, according to Zhang.

“The application of the satellites will not only benefit China but also the entire world as it is providing technological support for the protection of our home planet,” Zhang said.

A constellation of meteorological satellites for CO2 monitoring is expected to be built during China’s 14th Five-Year Plan period (2021-2025) amid the country’s efforts to peak CO2 emissions before 2030 and go carbon neutral before 2060.