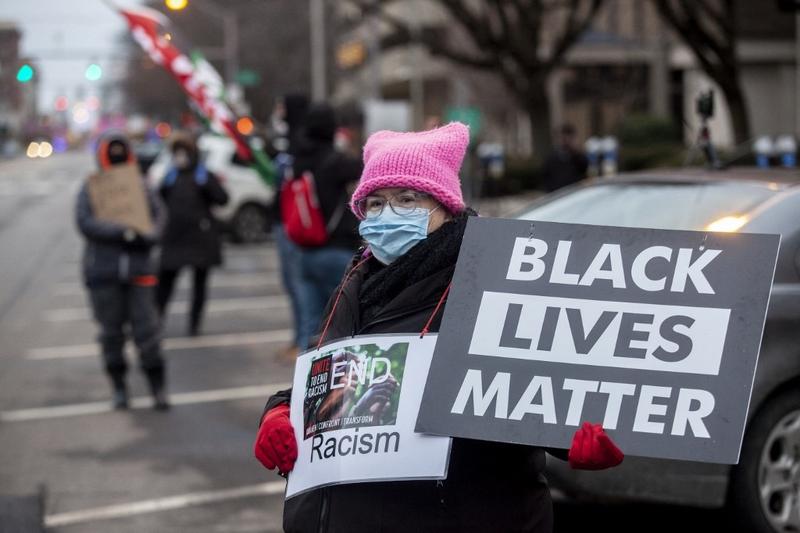 In this Dec 28, 2020 photo, protesters hold signs and flags during a demonstration against police brutality in front of the Fraternal Order of Police in Columbus, Ohio. (STEPHEN ZENNER / AFP)

BEIJING – The United States should face up to its deep-seated domestic problems including racial discrimination and violent law enforcement, and take concrete measures to improve its human rights situation, a Chinese foreign ministry spokesperson said on Tuesday.

Spokesperson Wang Wenbin made the remarks at a press briefing in response to a query that US House Speaker Nancy Pelosi recently joined so-called “Uygur rights defenders” for an update on human rights issues in China’s Xinjiang Uygur Autonomous Region.

Xinjiang now enjoys social stability and a sound development momentum, and the local people are living a safe and happy life. All residents in Xinjiang fully enjoy their rights, including the right to subsistence and development. Languages, traditional cultures and customs of all ethnic minorities in Xinjiang have been well protected and inherited, Wang noted.

ALSO READ: China to issue report on human rights violations in US

Over the past 60 years or so, Xinjiang’s economy grew by more than 200 times, its per capita GDP increased by nearly 40 times, and residents’ life expectancy rose from 30 to 72 years, he added.

“We are firmly opposed to the US attack on China’s Xinjiang policy and interference in China’s internal affairs under the pretext of human rights issues, and in disregard of the Chinese side’s tremendous efforts to protect human rights and promote employment of residents in Xinjiang,” he said.