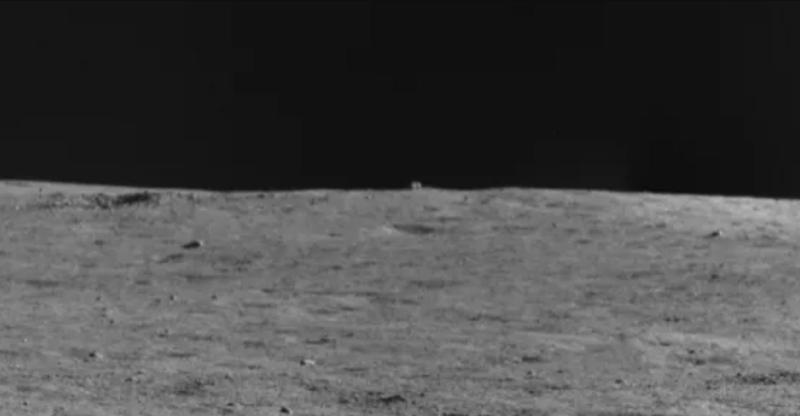 This image shows a cube-shaped object, referred to as “mystery house”, on the far side of the moon. (CNSA/OUR SPACE)

BEIJING – The cube-like object spotted recently by China‘s lunar rover on the far side of the moon aroused wild curiosity in cyberspace worldwide this week.

Yutu-2, the lander and rover of the Chang’e-4 probe, captured an obscure but intriguing image about 80 meters from its location during the mission’s 36th lunar day, according to Our Space, a Chinese science channel that published the machine’s latest diary on Dec 3.

Something cubic loomed on the horizon to the north, sitting next to a young impact crater, said the rover’s log. The image sparked heated debates on social media platforms.

Some described it as the remains of one of the smaller rocks that has collided with the moon. This was echoed by space journalist Andrew Jones, who considered it as a large boulder.

A Chinese online user at weibo.com compared the cube-like object to the Guanghan Palace, where the goddess of the moon lives in ancient Chinese mythology

There is no shortage of sensational explanations, however. “There seems to be a lot of straight lines in this feature, that’s very uncommon in nature, which is normally fractal-based,” tweeted “Viu Mobile,” an astronomical amateur from Texas, on Monday.

It might be “some structure from an ancient civilization on the Moon,” tweeted David Michaels.

More people tend to make fun of it. It has been imagined as Arc de Triomphe in Paris, the Marble Arch in London, the barbette of naval guns and a handle of the moon like that of a kettle-bell.

A Chinese online user at weibo.com compared it to the Guanghan Palace, where the goddess of the moon lives in ancient Chinese mythology.

Now the blurry cube image has become a cyberspace meme. Some even used computer graphics to enhance the picture, jokingly, into a Minecraft portal or a Nissan minicar. 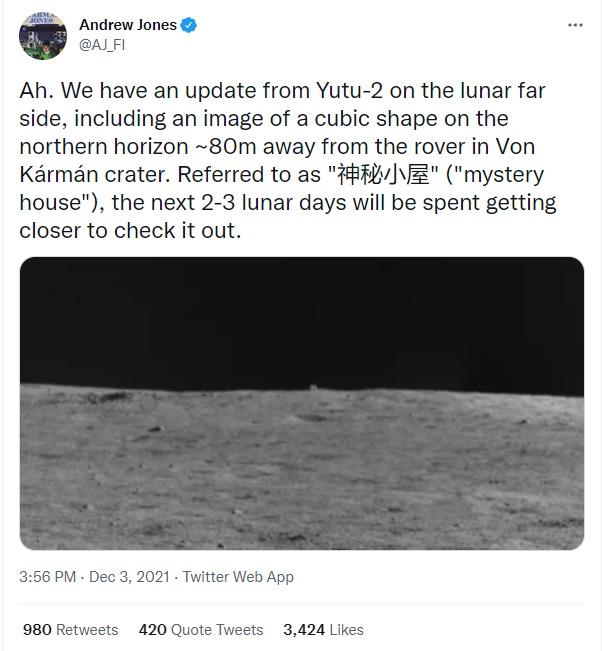 This screengrab shows a tweet by space journalist Andrew Jones about the cubic shape spotted by China’s lunar rover Yutu.

Other netizens dealt with it seriously. “The photo is a rock formation that, due to lighting and angle, looks vaguely like something humans could have made,” tweeted “SkepticalSinik.” “(It is) Pareidolia effect; we want to see something, so we do.”

“It’s not an obelisk or aliens, but certainly something to check out,” said Jones.

Yutu-2 will spend the next two to three months getting a closer look at the object, according to Our Space.

The Chang’e-4 probe, launched on Dec 8, 2018, made the first-ever soft landing on the Von Karman Crater in the South Pole-Aitken Basin on the far side of the moon on Jan 3, 2019.