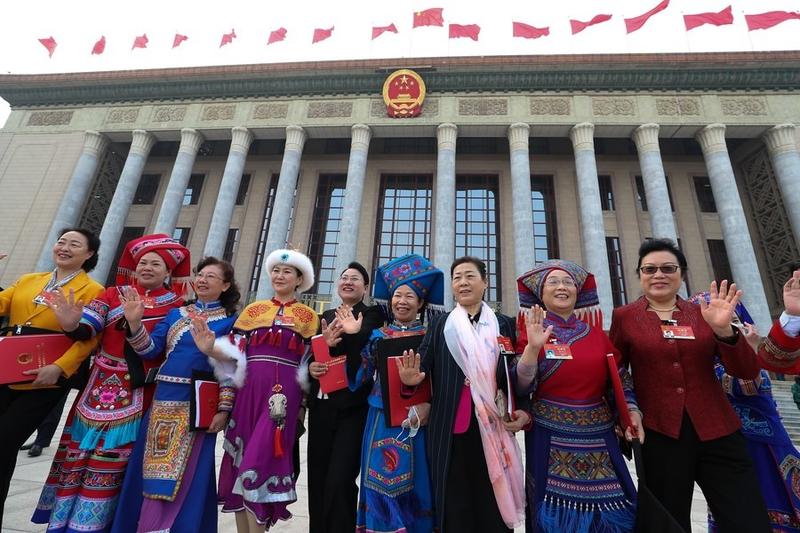 Deputies to the 13th National People’s Congress leave the Great Hall of the People after the closing meeting of the fourth session of the 13th NPC in Beijing, capital of China, March 11, 2021. (XINHUA)

Dispelling the notion of a universal type of democracy, China’s latest white paper on the theory shows Chinese whole-process people’s democracy as a true and most suitable form in the country’s context, analysts say.

The document, titled “China: Democracy That Works”, was released by the State Council Information Office on Dec 4. Democracy is a common value of humanity and an ideal pursued by ancient civilizations including China and cherished by the Communist Party of China and the Chinese people, it said.

Carlos Martinez, co-editor of Friends of Socialist China, said that the white paper provides a detailed insight into China’s democratic system at a time when the United States and its allies are making a big push to promote Western capitalist democracy as the only legitimate form of governance.

“Many in the West, having been told for so long that China is ‘undemocratic’ and ‘authoritarian’, will be surprised to find out that China has an extensive system of electoral representation at every level of society,” said Martinez, whose organization along with others is scheduled to hold a virtual Summit for Socialist Democracy on Dec 11.

Dennis Munene, executive director of the China-Africa Center at the Africa Policy Institute, said that the white paper “captures China’s principle of democratic centralism that demystifies the naysayers and liberal democrats who have a narrow and misconceived understanding of what a people-centered and progressive democracy within a civilization state entails”.

Many in the West, having been told for so long that China is ‘undemocratic’ and ‘authoritarian’, will be surprised to find out that China has an extensive system of electoral representation at every level of society.

As a blueprint that is “timely, factual and one rooted in history”, the white paper underscores China’s working democracy that integrates both the electoral and consultative systems of democracy to meet the aspirations of its 1.4 billion people representing the 56 ethnic groups, he said.

The people’s status as masters of the country is the essence of people’s democracy, said the white paper.

“There is much greater democracy in China than in many countries that claim to be democratic,” said Munshi Faiz Ahmad, former chairman of the Bangladesh Institute of International and Strategic Studies and a former Bangladeshi ambassador to China.

“Why? That’s because democracy is measured in terms of people’s consent, people’s supervision, people’s participation and people’s welfare. Looking at all these criteria, I think China is perhaps more democratic than many of the so-called democracies.”

What is written in the white paper, which highlights many important points, illustrates democracy with Chinese characteristics, said Ahmad.

“The important thing about it is that it is both process-oriented, as well as results-oriented,” he explained. “It’s procedural as well as substantive.”

It is a model of socialist democracy that covers all aspects of the democratic process and all sectors of society. It is a true democracy that works, it said.

Karori Singh, an emeritus fellow at the University of Rajasthan in India, said the paper defines China’s governance pattern as whole-process people’s democracy based on “sound institutional framework” and “concrete and pragmatic practices”, which efficiently operates in the Chinese context.

He said the Chinese people’s democracy is the composite of five main aspects – expanding democratic participation, efficient national governance, social stability and harmony, effective constraint and supervision of the exercise of power.

“Besides the elections and democratic consultation, there are adequate mechanisms for democratic decision-making, democratic management and democratic oversight, including supervisory commissions and judicial supervision,” he said, noting that such aspects have been extensively elaborated in the white paper.

“That is why the people’s democracy works effectively to enable people’s rights and overcome extreme poverty in a time-bound framework.”

China’s political power is not linked in any way with personal status, wealth, or social relations, but is equally enjoyed by all the people. The state power serves the people, rather than capital, said the paper.

Unlike in the West, China’s electoral democracy is not manipulated by financial interests, said Martinez. “Electoral campaigns are not high-budget marketing exercises, and people get elected on the basis of their record of serving the people.”

He noted that the white paper says there is no one-size-fits-all approach to democracy. “It therefore does not attempt to universalize China’s democratic model, but it does forcefully reject the attempts by the Western capitalist countries to universalize their model.”

To think that democracy is an invention of the West is erroneous, said Singh. “It is rather an institutional evolutionary process in the long history of human civilizations.”

The United Nations has recognized democracy as a universalized pattern of governance and universal value adhered to by all concerned. The world body observes Sept 15 as International Day of Democracy to generate awareness about democracy – without intentions to interfere in in any country’s internal affairs, Singh said.

Munene of the African Policy Institute said that the misconception of China being a one-party state has finally been nullified. The white paper affirms the political system of China – a people-centered democracy – as one anchored on multiparty cooperation and not a one-party system as propagated by China critics.

“The eight other political parties in China are not opposition parties, but cooperate closely and participate fully in the administration of State affairs under the leadership of the CPC as its advisors and assistants,” he said. “China’s political system is about development and prosperity of the people and not about competition and power gratification.”

Titipol Phakdeewanich, dean of political science at Ubon Ratchathani University in Thailand, said the white paper rebuts China’s criticism by Western countries, which argue that infrastructure construction projects launched by China around the world will undermine recipient countries’ democracy. On the contrary, the paper shows that China makes no effort to impose its ideas of democracy on other countries.

Instead, he added, it gives emphasis to “stability” and “harmony”, which is characteristic of Chinese policy, and helps society maintain order and achieve progress.

Looking at how people participate in many aspects of Chinese society, the mechanism of democracy can be seen at the very local level, Titipol said.