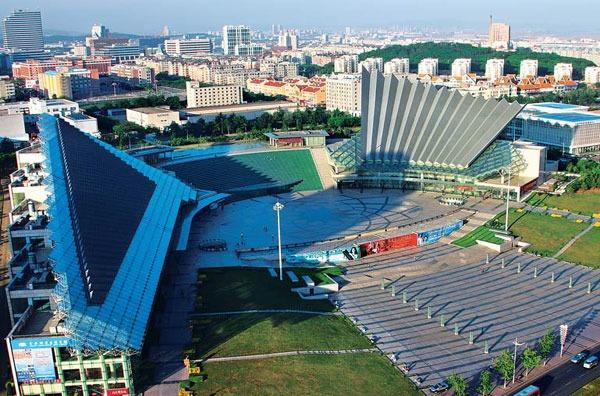 The cultural square, with a library, an exhibition center, a theater and a leisure squarea is a landmark in Jinpu New District,Dalian, in Liaoning province. (PHOTO PROVIDED TO CHINA DAILY)

The digital city operation and management center, dubbed the city brain, has completed the construction of hardware facilities and a basic software platform.

Similar platforms have been developed in a handful of other domestic cities, including Beijing, Shanghai and Guangzhou

It is expected to assist in areas such as limiting the flow of people in popular scenic spots during the Spring Festival holiday.

Liu Delin, director of Jinpu’s big data center, said the platform has demonstrated its efficiency and significance in fighting COVID-19 during the latest round of infections in Jinpu last December.

“Relying on the population-based database of the city brain, the system added impetus to the nucleic acid testing work,” said Liu.

When residents swipe their ID cards, the system can collect their basic information and input it automatically.

Information such as risk levels of coronavirus infections and prevention and control measures in different places can also be visualized on a big screen monitor.

“The coronavirus outbreak is a great test of the city brain,” said Qian Shigui, director of the integrated services center of Jinpu New Area, adding that it will continue to improve the system based on experience.

With a permanent resident population of more than 1.5 million, Dalian‘s Jinpu New Area is the 10th State-level new area, like Pudong New Area in Shanghai. It is also the first area in Northeast China to carry out the city brain project.

According to a report released in October by the Information and Industry Development Department of the State Information Center of the National Development and Reform Commission and PCI-Suntek Technology, the city brain has made remarkable achievements in sectors such as epidemic prevention and control, urban traffic management and city governance.

Similar platforms have been developed in a handful of other domestic cities, including Beijing, Shanghai and Guangzhou, said Dong.

Dalian is striving to make the city smarter, speed up the construction and application of 5G, and build a high-level city brain, Chen Shaowang, the city’s mayor, said in his government report during the annual session of the city’s People’s Congress on Feb 6.