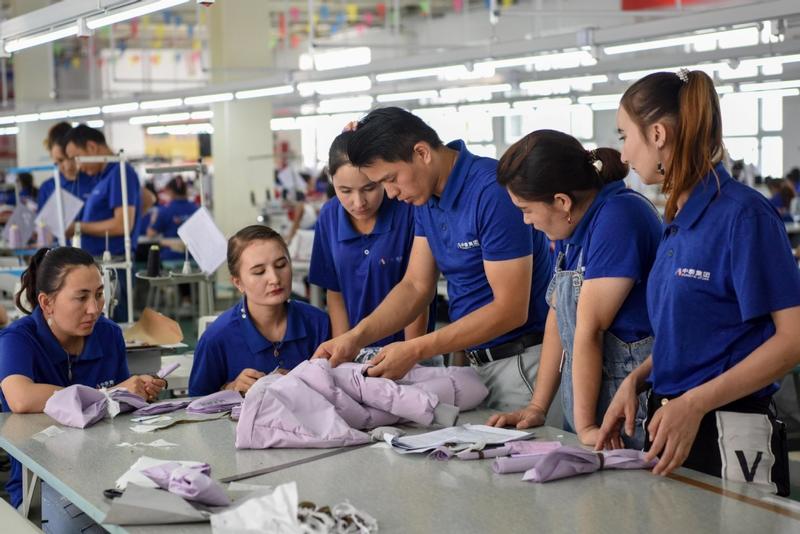 A technician checks the quality of products at a garment company in Hotan, Xinjiang Uygur autonomous region, on Aug 25. (PHOTO / XINHUA)

Improving the employment situation in the Xinjiang Uygur autonomous region not only helps people to live a better life but also plays a positive role in maintaining social stability, experts said.

“Many people in Xinjiang have seen how their lives have changed after gaining a stable income. They are also confident that they can have a better life as long as they put in the effort. With such motivation, they are less likely to be influenced by religious extremism,” said Zhang Yonghe, executive director of the Human Rights Research Institute at Northwest University of Political Science and Law, in Xi’an, Shaanxi province.

He made the remarks after the State Council Information Office published a white paper on Thursday on employment and labor rights in Xinjiang.

The paper said terrorists, separatists and religious extremists have long preached that “the afterlife is fated” and that “religious teachings are superior to state laws”, inciting the public to refuse to improve their vocational skills, economic conditions and the ability to better their lives. As a result, some local people suffer from poor education, lack of employability, low employment rates and inadequate incomes, causing them to fall into long-term poverty.

Furthermore, many terrorist attacks in the region in recent years were carried out by people under the influence of religious extremism.

Since 2012, Xinjiang has vigorously implemented employment projects, enhanced vocational training and expanded employment channels and capacity, the white paper said, because employment and job security have great significance in ensuring people’s right to work, improving their living standards and promoting social harmony and stability in Xinjiang.

“Facilitation of employment is the foundation for ensuring that people of all ethnic groups in Xinjiang have the opportunity to enjoy moderate prosperity in all respects and achieve long-term social stability,” said Tang Xiaobing, Party chief of the human resources and social security bureau of Kashgar prefecture.

“There has always been a severe shortage of farmland in southern Xinjiang, so encouraging impoverished workers to seek employment outside their hometowns is one of the most effective ways to boost employment. People also appreciate the opportunity,” Zhou said.

“It’s nonsense to say that Han Chinese finding work elsewhere is a move to pursue a better life while the Uygurs are ‘forced’ to do so when they also want the same thing.”

For years, certain international forces, who have shown ideological bias and prejudice against China, have fabricated facts to support their false claims of “forced labor “in Xinjiang and have smeared the regional government’s work on employment and job security, the white paper said.

Their actions amount to a denial of the fact that the local people in Xinjiang enjoy the right to work, aspire to move out of poverty and backwardness and are working toward that goal, it said, adding that such groundless allegations would be strongly opposed by everyone who values justice and progress.