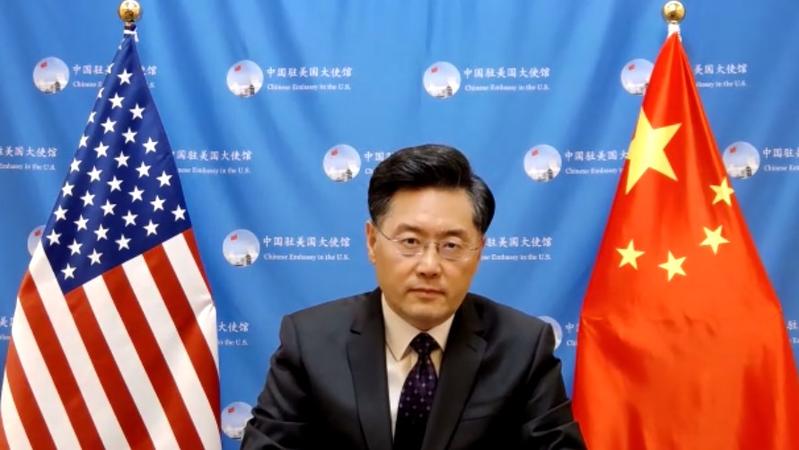 Chinese Ambassador to the US Qin Gang attends a dialogue with the Brookings Institution Board of Trustees in Washington on Thursday. (PHOTO PROVIDED TO CHINA DAILY)

China will continue to be a “reliable member of the international system”, committed to promoting peaceful development, while contributing its wisdom and solutions to global issues, said Chinese Ambassador to the US Qin Gang.

The ambassador also called for “vision and actions” to prevent confrontations between China and the United States.

“China does not want to disrupt or overturn the existing international system,” Qin said at a dialogue at the Brookings Institution Board of Trustees in Washington on Thursday. “China is not part of the problems in the world, but part of the solutions.”

In his speech, “Two Different Countries, One International System”, Qin said that in recent years, the world has increasingly looked to China to see what impact the country’s rapid growth has on the international order.

“We only want to work for a more peaceful and developed world and at the same time create a favorable environment for our peaceful development and contribute our wisdom and solutions to global issues,” Qin said.

He said throughout the five decades of its United Nations membership, China has been a “reliable member of the international system” and will continue being one. “Despite the various difficulties we have, we always try our best to do our part and do it well,” he said.

Qin also commented on unclear terms that are frequently used by the US side. The US, for example, says that its China policy is to defend the “rules-based international order “and ensure the “rules of the road” are followed. However, the US has not made itself clear on questions such as what the rules are, who made them and who the “traffic police” are.

There is only one set of rules, namely, the basic norms governing international relations based on the purposes and principles of the UN Charter, and international affairs should be addressed through consultation, and genuine multilateralism must be practiced, he added.

As relations between the world’s top two economies have been going through “unprecedented difficulties “in recent years, some people believe that China and the US are two different systems incompatible with each other, the envoy said. “On this, UN Secretary-General Antonio Guterres voiced … a common international concern: China and the US must avoid confrontation and the world cannot afford to be further divided,” Qin said. “We must work together to prevent his worry from coming true.”

The two sides must show vision and determination, and “take real actions to blaze a bright path” for the two countries and the world, he said.

Both founding members of the UN need to keep in mind the words in the UN Charter: “We, the people of the United Nations, are determined to save succeeding generations from the scourge of war, which twice in our lifetime has brought untold sorrow to mankind.”

Qin said, “We must follow the trend of the times, bear in mind the common aspirations of the people, and work for an open, inclusive, clean and beautiful world with lasting peace, common security and shared prosperity.”

China and the US, as the world’s two largest economies and permanent members of the UN Security Council, must shoulder their “unshirkable responsibilities” to uphold the authority and position of the UN, he said.

The ambassador also said that there are principles to adhere to, including not to “reverse the wheels of history” by putting together small groups targeted at third parties, or to act against the trend of globalization by abusing and overstretching the concept of national security, setting up the so-called Clean Network and “democratic technology alliance”, and suppressing foreign companies without any justifiable grounds. The “Clean Network”, announced by the former Trump administration, aims to keep Chinese companies out of 5G networks.

“Such actions have also increased global economic risks. The world should not be disrupted by ‘decoupling’ and the threat of ‘cutting off supplies’,” he added.

There are many areas where China and the US should and must cooperate, such as climate change, but different attitudes toward global issues may lead to “completely different results”, Qin said. “In 2014, we jointly helped African countries fight the Ebola epidemic. But after the outbreak of COVID-19, the US chose to politicize the disease, which created obstacles for us to get through this together.”

Qin noted that during President Xi Jinping and US President Joe Biden’s first virtual summit on Tuesday, Xi said that the global initiatives China has proposed are all open to the US, and that China hopes the reverse is also true.

“The Belt and Road Initiative follows the principles of extensive consultation, joint contribution and shared benefits. We welcome the US to find its complementarity with Build Back Better World,” Qin said.