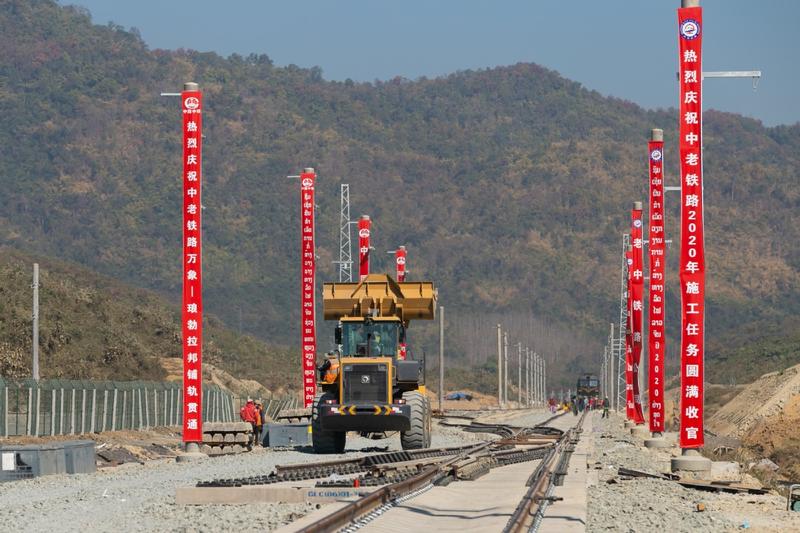 The China-Laos Railway tracks are successfully extended from the Lao capital Vientiane to the northern transport hub of Luang Prabang on Dec 29, 2020. (KAIKEO SAIYASANE / XINHUA)

With a track-laying machine slowly entering the railway station in the Lao city of Luang Prabang, 2020 closed out with yet another major step forward in a project that will connect the country with China by high-speed rail services.

The progress at the Luang Prabang work site－in the face of technical difficulties and the challenges caused by the coronavirus－has fueled optimism that the entire rail line can be connected this year under a year-end goal for a start to services.

“I was very excited and had a full sense of achievement when hearing of the completion of the track laying,” said Xu Zhou, a project manager at the China Railway No 2 Engineering Group, or CREC-2.

As a project under the Belt and Road Initiative, the China-Laos Railway is regarded as a strategic docking project between the China-proposed initiative and Laos’ strategy to transition from being a landlocked country to a land-linked hub

As a project under the Belt and Road Initiative, the China-Laos Railway is regarded as a strategic docking project between the China-proposed initiative and Laos’ strategy to transition from being a landlocked country to a land-linked hub.

Xu was not on site to witness the progress on connecting Laos’ capital Vientiane and Luang Prabang in the north, but he is no stranger to the railway project after having spent more than three years in the Southeast Asian nation.

Unlike with the rainy season in southern China, its counterpart in Laos tends to be “torrential and endless”, Xu said. Among the difficulties this can cause is that it is harder to set the foundation pit of a bridge. The conditions also make it difficult for large machinery and equipment to be moved into a construction site.

Xu, an experienced engineer responsible for the overall tasks carried out at a work site, developed a set of construction technology with his team. What they came up with resolved the problems encountered with pier construction for the Nam Khone River Bridge, the longest along the China-Laos Railway.

CREC-2 started pier construction for the bridge in May 2017. The main construction work was completed in June 2018, and the beam erection started in February 2019.

The completion of this bridge epitomizes the creative approach that is being applied to the entire construction. Aside from the many practical problems that are being overcome, there is the need to ensure safety amid the COVID-19 pandemic.

The Chinese company put all its employees, Lao and Chinese, under unified management to prevent any possible outbreak of the virus that the Lao medical system might not be able to handle, said Huang Ningshu, secretary of the Party committee of the construction headquarters.

The bureau set up two teams to take charge of infection prevention and control in Vientiane, Mengsai and Boding, and also opened a psychological counseling line to ensure employees’ physical and mental health.

There are more than 700 Lao workers, with 672 Chinese peers, on the work sites of CREC-2. Through on-site training programs, the company has equipped its Lao employees with knowledge of modern railway technologies, making them the first generation of workers with these skills in Laos.

More than 10,000 Lao workers have benefited from the training, Huang said.

In July 2018, a failure at a dam serving a hydroelectric power station caused flooding that killed dozens of people in Attapeu Province, and affected more 6,000 others.

At the request of the Lao government, CREC-2, along with other Chinese engineering companies, rushed to build four high-standard bridges that enabled equipment and rescue materials to reach the affected areas.

The bridges－built in fewer than 50 days－were then called “bridge of friendship” by the residents, as the structures connected the devastated areas to the outside world, said Xu, adding that they symbolized the spirit of unity and mutual help.

Lao Prime Minister Thongloun Sisoulith later signed an order of commendation for the Chinese companies involved to honor the achievement and their contribution to the affected communities. The department where Xu worked also received a development medal from the Lao government.

The track laying for the entire China-Laos Railway project is expected to finish in May, with services projected to start in December.