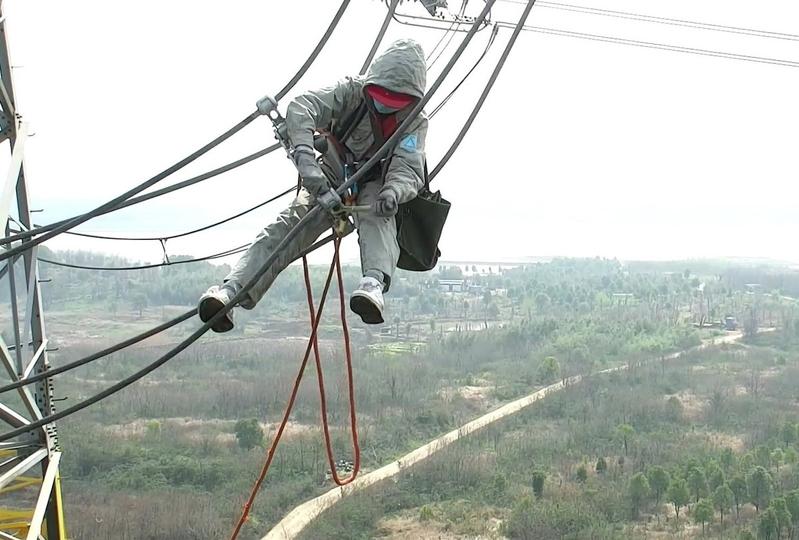 Hu Hongwei conducts maintenance work on a wire in Wuhan, Hubei province, in March. He was recognized as a national model worker on Tuesday. (PHOTO / XINHUA)

The first person to work on an ultra-high voltage transmission line-while the power was still on-was recognized as a national model worker at a ceremony attended by President Xi Jinping on Tuesday.

Hu Hongwei, a 41-year-old maintenance worker from Hubei province, was recognized for his outstanding professional skills and dedication amid the coronavirus pandemic.

Hu Hongwei, a 41-year-old maintenance worker from Hubei province, was recognized for his outstanding professional skills and dedication amid the coronavirus pandemic

Hu served as an armed police officer for three years before joining the maintenance center of the State Grid Hubei Electric Power Company in 2000.

He said he felt rather excited, as well as a bit nervous, after being informed that he would work on live transmission lines, which is a big test of a maintenance worker’s skill-and psychological makeup.

In 2009, he was selected to do maintenance work on live 800-kilovolt transmission lines. It was the first time anyone in the world had taken on this potentially deadly task, which required not only adept skills but bravery and boldness.

However, Hu embraced the job with a highly positive attitude, itching to take advantage of the historic opportunity.

“At the time, whenever I thought I would become the world’s first person to operate on a live transmission line with such high voltage, I was thrilled,” he said.

Hu went through rather intensive training to conquer the biggest challenge he had ever faced, doing simulated operations in the daytime and analyzing his performance at night to optimize every single step.

He went through about 200 pairs of gloves and wore out 14 pairs of work shoes and seven suits during the half year of preparations, as any damage to clothing during practice runs rendered them unusable.

When the day came on June 10,2009, he wore a protective suit and climbed onto a high-voltage tower at an experimental base in Beijing.

He operated with proficient skills for over one hour and successfully finished the test.

“The real limit is cowardice in our heart,” he said. “Everyone can become a hero as long as they work hard and never think of giving up.”

Hu is a native of Wuhan, the provincial capital that was hit hardest by the coronavirus in China.

“My colleague and I pledged to ensure there was no power outage at the time, and we worked 24/7,” he said.

“I remembered that in late February, we got a warning that a high-voltage transmission line may have a hidden problem that could lead to a massive power failure in Wuhan if we didn’t handle it in time,” he said. “We had to get out of our car about 4 kilometers from the emergency site because the road was blocked by mounting dirt.”

They had to carry about 65 kilograms of equipment.

“My clothes got totally wet after finishing the maintenance, and I was cold and hungry,” he said.

“That was just a small part of our work amid the pandemic,” he added. “My colleagues and I worked three days and nights to power the Leishenshan Hospital, five days and nights for Huoshenshan and 37 hours for the largest makeshift hospital in Wuhan at the time. We safeguarded light and also hope for the people.”