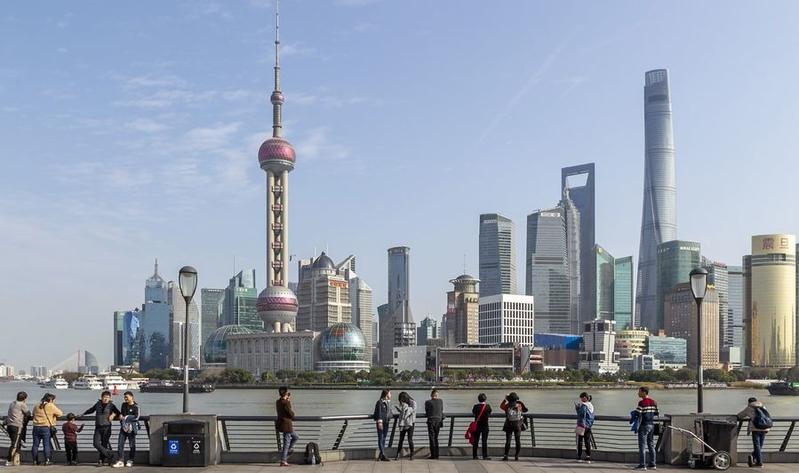 In this Jan 6, 2020 photo, tourists admire the skyline view of Lujiazui area at the Bund in Shanghai, east China. (WANG XIANG / XINHUA)

BEIJING – China on Friday unveiled a draft blueprint for economic and social development over the next five years and clarified the long-range objectives through the year 2035, setting policy priorities for a new development stage that is crucial for the country to achieve socialist modernization.

While China’s five-year plans adopt a top-down approach during implementation, they entail rounds of bottom-up opinion solicitation before being put into practice

The document, which is being reviewed by the ongoing annual session of the country’s top legislature, listed major social and economic goals for the 14th Five-Year Plan (2021-2025) period.

The five-year plans are an important mechanism initiated in the 1950s, which has navigated the country through economic ups and downs, as well as changes in the external environment, helping China secure a major increase in the strength of the nation and its social and economic development.

The figure was 1,232 times more than that in 1953, when China started implementing its first Five-Year Plan, marking the country’s miraculous transformation from an economic backwater to the world’s second-largest economy.

Over the years, China’s five-year plans have seen their focus evolving with the changing national conditions.

Before China initiated its reform and opening-up in the late 1970s, its five-year plans mainly focused on expediting the industrialization of the then agrarian country. At a time when the planned economy was dominant, the five-year plans guided the flow of limited resources to meet the basic needs of disadvantaged groups, said Yan Yilong, deputy dean of the Institute for Contemporary China Studies of Tsinghua University.

With the country’s gradual transition from the planned economy to a market-oriented socialist market economy, its five-year plans have progressed to include more market-based guidelines instead of obligatory commands and rigid economic targets.

Also, the plans are no longer just economy-focused. More inclusive development philosophies and topics have been enshrined in the plans to guide the country’s all-round development, with much attention given to environmental protection and social welfare.

While China’s five-year plans adopt a top-down approach during implementation, they entail rounds of bottom-up opinion solicitation before being put into practice. Suggestions from experts, government officials, political advisors and third-party assessment organizations are taken into consideration during the formulation of the plans.

Such efforts have been made to guarantee a feasible, consistent, and predictable roadmap, which closely aligns with the country’s long-term vision for national rejuvenation.

In contrast to the often flip-flopping administrations in Western countries, where one government’s promises and plans are less likely to be carried out by the next, China’s five-year plans show a more predictable future, according to analysts.

For the first time, phrases such as “brain-like intelligence,” “genetic technology” and “future network” feature in a draft five-year plan, highlighting China’s determination to make major breakthroughs in science and technology

“In many countries, politics play a key role in determining what a country’s leaders pledge they will achieve for the next several years, and what politicians say they will do and what they do are often two very different things,” said Carl Fey, professor of international business at Aalto University School of Business in Finland.

As China embarks on a new quest to fully build itself into a modern socialist country, the new five-year plan also features fresh missions.

For the first time, phrases such as “brain-like intelligence,” “genetic technology” and “future network” feature in a draft five-year plan, highlighting China’s determination to make major breakthroughs in science and technology.

The country’s research and development spending is expected to grow by over 7 percent annually in the next five years, according to the draft outline of the 14th Five-Year Plan (2021-2025) for national economic and social development and the long-range objectives through the year 2035.

Like many other goals listed by the draft outline – from innovation-driven development, well-being of the people, to ecological conservation – the indicator is an “anticipated target” rather than an obligatory one.

He Lifeng, head of the country’s top economic-planning body, said that the goals have taken into account China’s ability to achieve them and at the same time left room for the country to counter uncertainties.

“The major benchmark indicators are just like peaches on a tree that can only be picked if one jumps hard,” he said. “And we have to jump hard.”