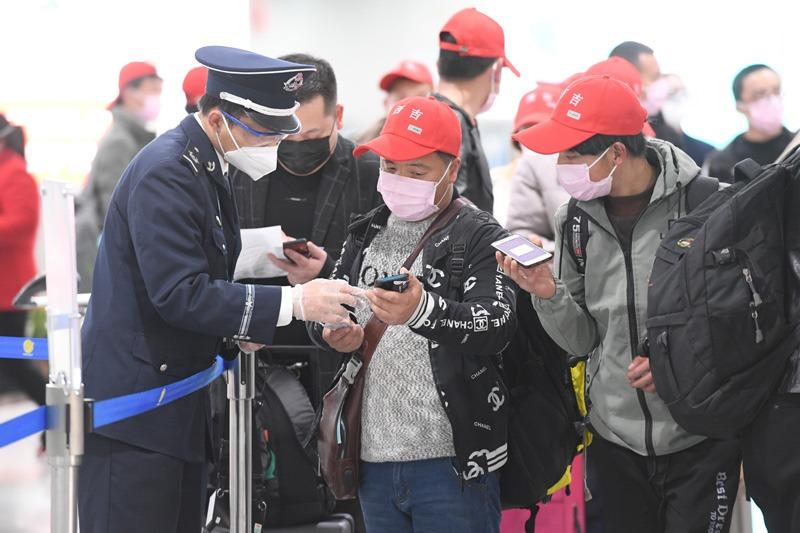 On March 4, a batch of migrant laborers from various townships in Xiji county of the Ningxia Hui autonomous region boarded a chartered plane to Xiamen, Fujian province, to resume work. It was the first time many of them had taken a plane and left their hometown.

Ma Ruhua, 22, is a junior college graduate from a poverty-stricken household in Xiji. She is among those who chose to leave the county to seek better employment opportunities.

“The whole county was locked down during the pandemic,” she said. “The coronavirus had terrified us, but we were more anxious about losing jobs and hoped to restart work soon.”

Since February, the county has arranged seven batches of chartered flights and buses and sent 940 migrant workers to Shenzhen, Guangdong province, Zhejiang and Fujian provinces and the Xinjiang Uygur autonomous region, with at least 597 coming from registered impoverished households, according to the local government.

Xiji is a major labor exporting county in Ningxia, with more than 100,000 laborers working across the nation in labor-intensive industries. For farmers from the county, which has the largest agricultural population in Ningxia, exportation of labor has given them an alternative.

Xiji is a major labor exporting county in Ningxia, with more than 100,000 laborers working across the nation in labor-intensive industries.

The barren land, scarce water and fragile environment there had forced Chen Taiping to leave his hometown and join his fellows to work in a garment factory in Fujian in 2010.

He had worked in the factory for five years, but by the end of 2015, the slowdown of the clothing market drove him to return home.

“Farming relies on weather. The harvest is unstable, but working outside ensures me a steady salary,” Chen said, adding that although the environment has changed a lot, the income from working on the farmland is incomparable to working in the factory.

During the Lunar New Year festival in 2016, the 33-year-old found that the local government was sending migrant laborers to Putian in Fujian, which is a poverty alleviation project between Fujian and Ningxia.

Chen, who abandoned his studies after graduating from middle school, is preparing for self-study to obtain a college diploma.

“Working outside for 10 years broadened my horizons and made me realize the importance of studying,” he explained.

Making money is no longer his only goal－what matters most is gaining more knowledge and skills in management and textile technology, he said.

As the last county in Ningxia that has not been lifted out of poverty, Xiji has been promoting labor exports by cooperating with local labor service companies, labor service stations in various provinces and increasing employment training for migrant workers to make it a leading industry in the fight against poverty.

Li Zhengshuai, deputy general manager of a local labor service enterprise, said that the company serves as an agency linking enterprises and laborers.

“We provide information about local workers as well as employment requirements of enterprises, building a bridge between them to facilitate their connection,” Li said.

Apart from labor agencies, the government has also established labor service stations in various provinces and regions to help solve labor disputes and safeguard the rights of migrant laborers, said Mu Haili, deputy head of the talent service center for employment and entrepreneurship in Xiji.

“Xiji laborers are welcomed by companies in other provinces and regions because they are skilled and hardworking,” Mu said.

Now, the county has established such stations in Xinjiang, Beijing, Fujian, Shandong province and the Inner Mongolia autonomous region, according to Mu.

Li Ruotai, director of the county’s employment vocational training center, said that the county has provided training for over 10,000 laborers this year, including 5,826 from poor households, in skills including cooking, excavator and loader operation and housekeeping services.

“Such training is free and will help them master one or two practical skills and make more money when they work outside,” Li said.

Xiji will continue to focus on improving the skills of local laborers, head of the service center Zou Guoqiang said, adding that the county will also continue to increase labor exports as it prepares to be lifted out of poverty this year.

Miao Lina contributed to this story.