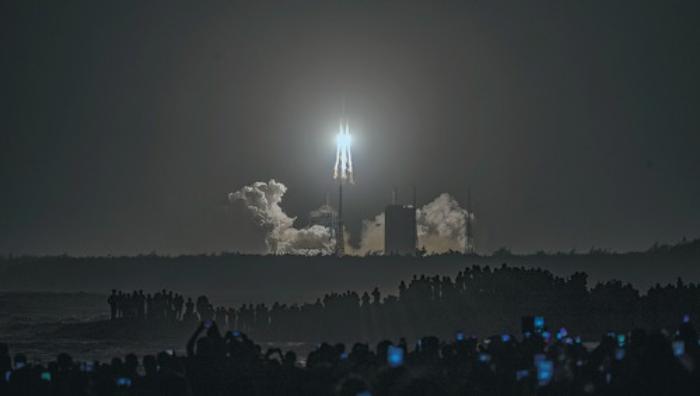 People take photos from afar as the Long March 5 carrier rocket soars into the sky in Wenchang, Hainan province, in November 2020. (LIU YANG / FOR CHINA DAILY)

A growing number of Chinese shutterbugs are training their lenses on rocket launches as the country’s space program develops, Zhao Lei reports.

Young mother Zhang Jingyi is willing to pay 50,000 yuan (US$7,700) to a hotel owner in a coastal township about 3,000 kilometers to the south of Beijing, where she lives, to cover the cost of renovating the hotel’s rooftop.

Zhang is not a real estate investor. Nor is she a property broker or private detective used to observing targets from on high. She’s a freelance photographer who just wants a neat, clean platform in Longlou township in Hainan province for her newest hobby－taking pictures of soaring Chinese carrier rockets.

“The Gloria Longda Hotel’s rooftop is the perfect place to take pictures of rocket launches because－except for the buildings inside the launch complex－it is nearest to the two launch towers,” Zhang explains.

If my photos can be seen by more people through the media and make the audience feel proud of our nation and its space industry, I’d feel satisfied.

“Standing there, you can produce very clear photos of the rocket’s front side. The problem is that the rooftop is in poor condition since it hadn’t received proper maintenance and really looks like it belongs to an unfinished building. So, if the hotel manager agrees with my terms,I’ll be glad to pay for the cost to improve it.”

Her terms are plain and simple: The manager will reserve a place of her choice on the rooftop each time she comes to Longlou to photograph launches.

Longlou is a farming community with a population of about 26,000 in Wenchang city and is home to the Wenchang Space Launch Center, China’s youngest and only coastal launch facility.

The center, which was first used in June 2016, is central to the nation’s deep-space exploration programs and manned spaceflights because it’s the only space facility in China capable of launching the Long March 5 heavy-lift carrier rocket, an essential part of those programs.

Several factors－the rapid growth of China’s space industry and its rise in the international arena, recent achievements in lunar-and Mars-exploration programs, and space facilities becoming more open to the public－have attracted Chinese shutterbugs like Zhang and her friends to grab snapshots of the country’s space endeavors, which are usually embodied by the spectacular scene of gigantic rockets lifting off.

The Tianwen 1 Mars probe soars into the air atop a Long March 5 carrier rocket in 2020. (WANG HAO / FOR CHINA DAILY)

During the past three spaceflights from the Wenchang center, Zhang and dozens of professional and amateur photographers packed Gloria Longda’s rooftop, waiting for the moment when the rocket thundered skyward.

“The thought of taking pictures of rocket launches had occasionally come to my mind, but I didn’t actually do it because I had been focused on photographing stars and wild animals around the world,” Zhang says.

“At the end of 2019, some of my friends, who are freelance photographers, were commissioned by a carmaker in Beijing to take pictures of a Long March 5 launch in December that year because the company is an official partner of China’s space agency, and it wanted to use the photos in its promotional materials.”

She was also invited by the carmaker, but she couldn’t make such a long-distance trip then because she was pregnant.

“I saw their pictures (of the launch). They were magnificent. I was determined to watch and shoot the next Long March 5 mission in person,” Zhang recalls.

“(Also), starting last year, the novel coronavirus began to plague the world, so I could no longer make trips outside China to photograph stars and animals. So, I could pay more attention to the idea of photographing Chinese space programs and make detailed plans to do it.”

She says many astrophotographers and other photography enthusiasts in China have been stranded by the global spread of COVID-19 since the beginning of last year and can’t travel abroad like before. So, many have turned to “attractive” subjects at home, especially launch missions.

“In March, I got a call from my friend Wang Hao. He asked whether I was interested in joining him to take pictures of China’s first Mars mission－Tianwen 1-that was scheduled to launch at the Wenchang center in the summer. He said he’d found ‘the best photographing post’ at Gloria Longda.”

Zhang Jingyi, a freelance photographer, says many astrophotographers and other photography enthusiasts in China have been stranded by the global spread of COVID-19 since the beginning of last year and can’t travel abroad like before. So, many have turned to “attractive” subjects at home, especially launch missions

Without hesitation, Zhang replied: “Sure. Let’s do it.

Four months later, the woman invited some friends to come along to Wenchang to witness the launch of the Tianwen 1 Mars probe.

“The best photographing spot, as Wang told me, is the hotel’s rooftop. The owner would open its door about three hours before each launch, so we’d need to wait outside the door on the morning of July 23 to make sure we could occupy a good place,” Zhang says.

“There were about 30 amateur and professional photographers, and everyone wanted to get a good place, so we needed to move faster than others.”

It was a scorching morning in the hottest season in Hainan.

Zhang and her fellow photographers were drenched in sweat under the blazing sun. But the dehydrating wait soon proved to be worth it－as the countdown reached zero at 12:41 pm, 10 engines at the bottom of a Long March 5, the largest model in China’s rocket fleet, roared to life to blast the 20-story-tall machine into the blue sky.

“That was our first time to see a big rocket ignite and blast off. All of my friends and I were in awe. We were very happy and excited with that beautiful, unforgettable scene. Everyone was exclaiming things like ‘Oh my God!’ or ‘Amazing!'”

She has shot six launches, including that of the Chang’e 5 robotic probe, the world’s first spacecraft to bring lunar materials back to Earth in more than four decades, and the debut flight of the Long March 8 medium-lift rocket.

These missions have led her to travel to all four of China’s launch facilities－Wenchang, Jiuquan, Xichang and Taiyuan.

“The most unforgettable scene to me so far is the moment the Long March 5 that carried Chang’e 5 lifted off from its launchpad in Wenchang against the dark sky. Its flame was dazzling and beautiful, and the clouds looked spectacular as the rocket pierced them,” she recalls.

“After I took the pictures, I immediately rushed back to my room to check and edit my photos, as did the other photographers at Gloria Longda. Nobody went to bed after the launch. Not only were we too excited to sleep but also each of us wanted to be the first to publish pictures about this historic mission.”

Zhang says she posted six photos on her Weibo micro blog account and instantly got more than 7,000 reposts.

About 70 photographers she knows, mostly freelancers and amateurs, were spread out across the rooftops of Longlou to record the landmark Chang’e 5 mission.

The freelancer says she usually publishes some of her rocket-related pictures on her social media accounts after each mission to entertain her friends and more than 1 million fans, adding that she also provides such photos to domestic news outlets for free.

“The media doesn’t need to pay me for my rocket photos because I am happy to share them with as many people as possible. The rockets I photograph belong to my motherland and are part of the space programs that keep bringing us, the Chinese people, glory and honor,” she explains.

“If my photos can be seen by more people through the media and make the audience feel proud of our nation and its space industry, I’d feel satisfied.”

There are at most 100-odd photographers in China who regularly take pictures of space missions, Zhang says.

“There are some difficulties for amateur photographers like me, who don’t have an official invitation from space authorities,” she explains.

“For instance, some of my friends can’t find a good position in Longlou that has clear view of the rocket because not every hotel in the town has an ‘acceptable’ rooftop. So, they have to use rooftops of residential buildings, even unfinished structures. But local police sometimes force them to leave these places because of what they consider safety concerns.”

Zhang’s friend Wang says most Chinese photographers he knows chose the Wenchang center to make their first attempt to shoot a spaceflight because that facility and Longlou township, despite some restrictions, are still more open and friendlier to visitors.

“The other three launch centers, as far as I know, are very hard for photographers to enter unless you are hired by a media organization,” he says.

“Nevertheless, I will make all-out efforts to go to the Jiuquan Satellite Launch Center to take pictures of the departure of the coming manned missions. The first time I watched a rocket launch on TV at my home in Guangzhou was in October 2003, when Yang Liwei conducted the Chinese nation’s first space ride from Jiuquan.”

Wang says he hopes Chinese space launch centers could become more open to members of the public, including amateur photographers, so that the splendid scenes of space missions could inspire more young people. 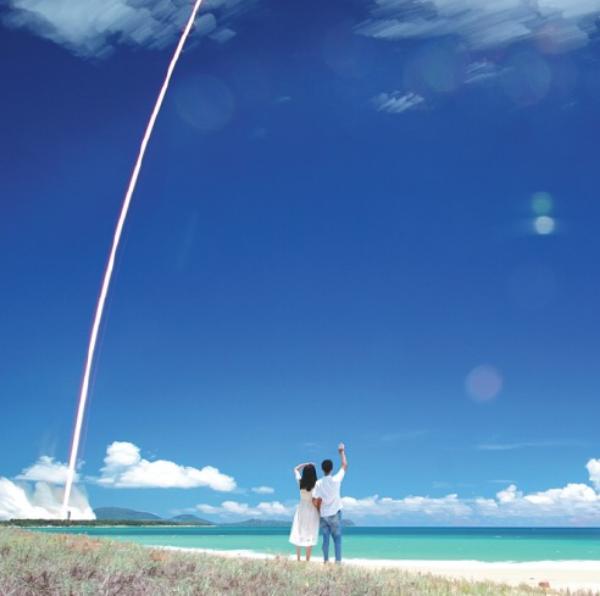 Photographer Luo Hongyang and his wife pose for a photo in front of the exhaust trail left by a rocket that carried China’s Tianwen 1 Mars probe into the air in Wenchang in July 2020. The trail is extracted and refitted into the picture from a video documenting the launch (PHOTO PROVIDED TO CHINA DAILY)

“I’m an astrophotographer. I like putting beautiful scenes like stars and meteor showers and my wife and myself in one photo, which can serve as a memento of our love.

“Last year was the 10th anniversary of our relationship and the fifth of our marriage. We wanted to take our pictures with something special. So, we came up with the idea of rockets,” he says.

Luo and his wife have by now witnessed five missions in Wenchang.

And he plans to continue this “romantic project”.