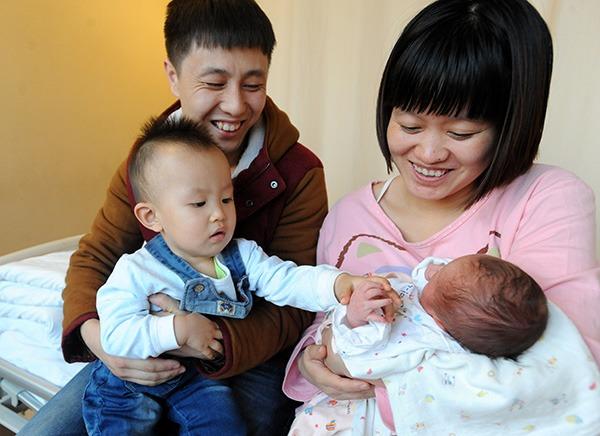 A couple both born after 1990 hold their children, an infant daughter and her 18-month-old elder brother, in Shenyang, Northeast China’s Liaoning province. (LI HAO / CHINA DAILY)

China’s top health authority said on Thursday that it will support the country’s northeastern region to fend off challenges posed by low birthrates and dwindling population by adjusting family planning policy.

The National Health Commission said that the Northeast China — encompassing Heilongjiang, Jilin and Liaoning provinces — can put forward trial plans to encourage local families to have more than two children, after extensive research and analysis.

Expert research will focus on such policy’s effects on local economic development, social stability, resource and environmental strategy and the public services sector, the commission said.

The region also needs to “gauge changes in local population following the policy shift, work on other supportive policies and appraise related societal risks,” it added.

The comments were released on the commission’s website in response to a proposal from a deputy to the National People’s Congress, China’s top legislative body.

The proposal suggested the country’s northeastern parts be the first in the country to further adjust family planning measures, in a bid to halt its sharp decline in population.

China introduced a universal two-child policy that allows most families to have two children in 2016. However, the number of new births per year has remained stagnant, fueling concerns on a rapidly aging workforce.

The dilemma is most pronounced in the three northeastern provinces that have recorded some of the lowest annual fertility rates, contributing to a drop in overall population in the region.

The commission said the region’s population decline is caused by a series of factors related to its regional economic model, industrial structure and social policies.

“For instance, as local resources have dried up and China is upgrading its industrial development, a large number of young population there are unable to land satisfactory local jobs, and have migrated to areas where economic growth is better and salaries are higher,” it said.

Although many border residents in the region can have up to three children per family, the policy relaxation has failed to boost local families’ willingness to have more children so far.

As a result, the commission said shifting family planning policies are expected to exert limited impact on fertility decisions.

“Economic burden, lack of nursery care and career development of females have become significant factors in swaying birthrates in the region,” it said.

“In order to raise fertility levels, it is crucial to focus on the public’s demands, resolve weaknesses in basic public services and address practical concerns on giving birth and rearing children,” it added.