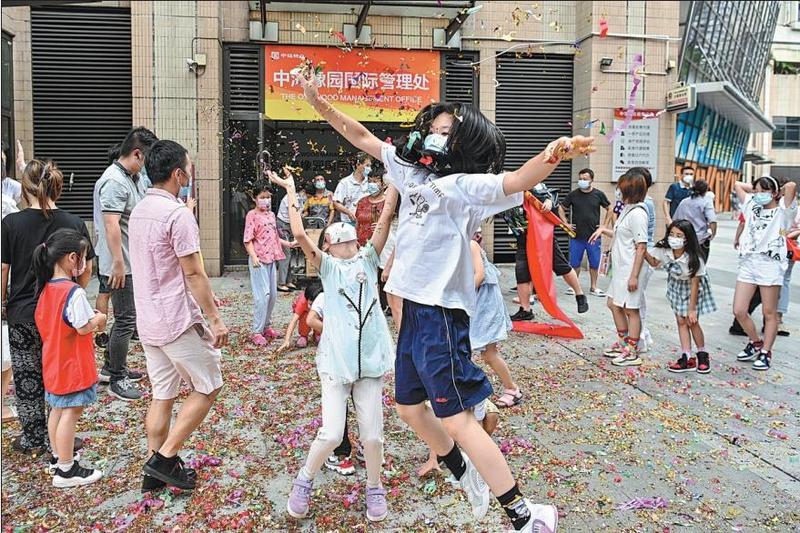 Residents celebrate the lifting of an epidemic-control lockdown in a neighborhood in Guangzhou, Guangdong province, on Monday. Lockdowns started to be lifted on Monday in 11 of the city’s subdistricts, where they had been enforced for more than two weeks due to coronavirus concerns. The city’s health authorities warn that the fight against COVID-19 remains in a critical stage. (CHEN JIMIN / CHINA NEWS SERVICE)

After epidemic-control lockdowns were lifted in some subdistricts of Guangzhou, the capital of Guangdong province, a city health official warned on Tuesday that there is no room for sloppiness or slackness in the fight against the novel coronavirus outbreak.

“We are now in a critical moment in the fight against the COVID-19 pandemic, as some new places were added to the lockdown list,” said Chen Bin, deputy director of the city’s health commission.

Eleven subdistricts that had been under closed management for more than half a month due to coronavirus concerns started to lift lockdowns on Monday.

However, two new areas in the city’s Huangpu district were added in the list on Monday, the district government said.

Chen called on Guangzhou residents not to attend mass gatherings or leave the city, and to keep wearing masks in public places.

“We’ve had good news of the lifting of containment in some areas,” she said. “But there has still been adjustment of closed-off places in the last two days, indicating that the battle against the epidemic is still at a crucial stage.”

Zhong Nanshan, a prominent respiratory disease expert, called for faster, stricter and more practical control and prevention measures in the fight against the coronavirus outbreak.

Chen said Guangzhou recorded only one locally transmitted COVID-19 case on Monday, which was detected in a hotel being used to quarantine close contacts of confirmed cases.

The new female patient, 75, was transferred to a city hotel for quarantine after being identified as a close contact of a confirmed case on June 7. She was sent to the Guangzhou Eighth People’s Hospital for treatment on Monday.

The city has reported 147 locally transmitted COVID-19 cases since May 21, including 140 confirmed cases and seven asymptomatic carriers, according to the health commission.

Zhong Nanshan, a prominent respiratory disease expert, called for faster, stricter and more practical control and prevention measures in the fight against the coronavirus outbreak.

“At a critical time, we need to concentrate more on identifying risks and effectively cutting off the chain of transmission,” he said during a work meeting in Guangzhou on Monday on control of the corona-virus outbreak.

COVID-19 vaccinations will fully resume in Guangzhou next month, the city’s center for disease control and prevention said.

At a regular news briefing on Tuesday, Zhang Zhoubin, deputy director of the center, said no first doses of COVID-19 vaccine will be administered in the city before June 30. It resumed giving second doses on Sunday.

Guangzhou canceled its citywide vaccination service at the end of last month amid increased efforts to organize more medical personnel to conduct large-scale nucleic acid testing after the reporting of the first confirmed COVID-19 case in the latest outbreak last month.

“Key groups of people taking part in the control and prevention of the outbreak will be given priority for the second dose,” Zhang said.