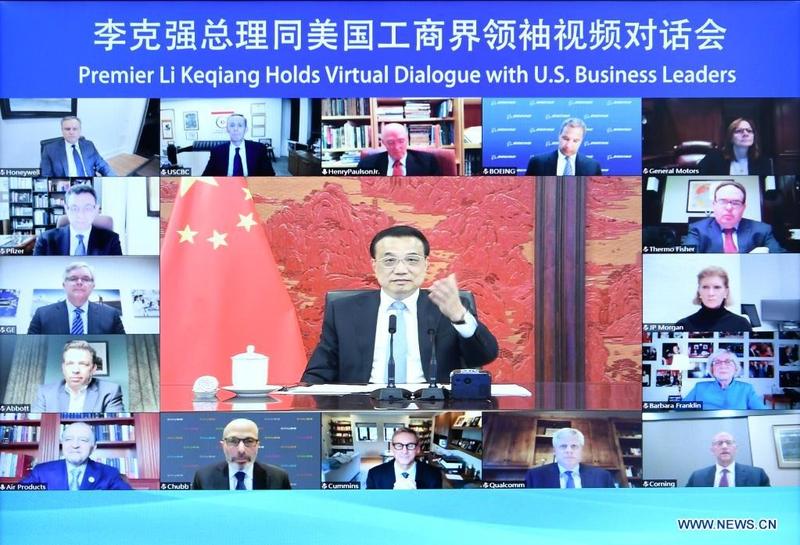 Decoupling between China and the United States will benefit neither side but will harm the world, and the two nations should meet each other half way to work toward greater shared interests, Premier Li Keqiang said on Tuesday.

Speaking during a meeting with US business leaders via video link, Li highlighted the need for the two sides to solve the problems arising during the process of cooperation.

The meeting, chaired by former US Treasury secretary Henry Paulson, was attended by members of the US-China Business Council and executives from over 20 US-based multinationals.

It is important for the two sides to step up dialogue and communication, expand pragmatic cooperation, properly manage differences and move bilateral relations in a generally stable direction, Premier Li Keqiang said

Bilateral trade and economic ties are essentially mutually beneficial, and these relations help increase the benefits enjoyed by both peoples and also contribute to global peace, stability, development and prosperity, he said.

Li cited the rise in bilateral trade volume in the face of multiple shocks last year as evidence that the conditions and opportunities for bilateral cooperation are an objective reality and the two sides need each other for trade and economic cooperation.

He highlighted the need for the two nations to follow consensuses reached by the two presidents during their phone call in February and to respect the core interests and major concerns of each other in the spirit of nonconflict, nonconfrontation, mutual respect and win-win cooperation.

It is also important for the two sides to step up dialogue and communication, expand pragmatic cooperation, properly manage differences and move bilateral relations in a generally stable direction, he said.

Li reiterated China’s commitment to pursuing its basic national policy of opening-up, saying that China will only open wider to the world.

China, in its efforts to foster a new development paradigm, will keep unleashing the potential of its domestic market and shoring up economic growth and the job market, Li said.

Meanwhile, the new development paradigm will enable China’s market to open wider and make the nation a key destination for foreign investment and a major global market, he said.

The US business leaders stressed that avoiding confrontation and bringing US-China relations back to a constructive track meets the common interests of both sides, according to a news statement released after the meeting.

The US business community supports the two sides increasing mutual trust through communication, boosting coordination and cooperation in the fight against COVID-19, coping with climate change, sustainable development and innovation and resuming bilateral exchanges and personal travel as early as possible, they said.

Craig Allen, president of the US-China Business Council, said in a statement after the meeting that the US business leaders emphasized the importance of fully implementing China’s economic reform agenda and fulfilling its commitments in phase one of the bilateral trade deal signed last year.

“We stressed that the new era of US-China relations will be defined by economic competition, but that frank communication can offset the risks of confrontation,” he said.