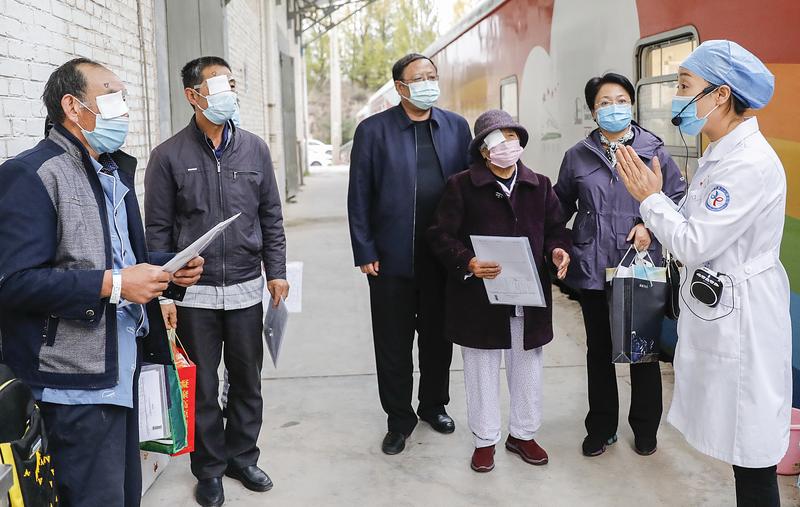 A nurse briefs senior patients about to receive cataract operations on a medical train in Haidong, Qinghai province, on Wednesday. The train arrived in the province in July and has helped more than 770 cataract patients recover their sight. (ZHANG YUWEI / XINHUA)

In an instruction to a national working meeting on aging on Thursday, Premier Li Keqiang underlined the need to focus on elderly people’s needs in social security, elderly care and healthcare services, as part of efforts to tackle the aging trend and improve the group’s sense of gain, happiness and security.

He added that more efforts should be devoted to developing community-based elderly care services and mobilizing the whole of society to meet diverse demands for elderly care.

Meanwhile, local governments should pay more attention to improving the living environments of the elderly, enriching their daily lives, safeguarding their rights and promoting the virtue of respecting and caring for the elderly across society.

Vice-Premier Han Zheng, who attended the meeting held in Beijing, said China will support seniors to participate in economic and social activities and accelerate the development of the old-age economy.

More working plans and industry standards should be drafted, he said, adding that the potential of the market for old-age products and services should be stimulated.

Official data show that the number of people aged 60 or above reached 264 million last year, or 18.7 percent of the population.

The aging trend is deepening. Data from the National Working Commission on Aging shows that from 2016 to last year, China’s elderly population grew by 8.4 million annually.

The total number of elderly is expected to exceed 300 million by the end of 2025.

Wang Haidong, director of the National Health Commission’s department of aging and health, said China’s demography is shifting, with the rapidly increasing number of seniors and their rising share of the population a notable feature.

“In China, building an elderly-friendly society will require efforts in multiple aspects, such as promoting the virtue of showing respect to and caring for the elderly, creating a social environment favorable to them and improving the pension system,” he said.

As part of efforts to satisfy demands of seniors, Wang said it is significant to step up integration of medical and elderly care services, and more efforts will be devoted to encouraging and supporting diverse collaborations between healthcare and elderly care institutions.