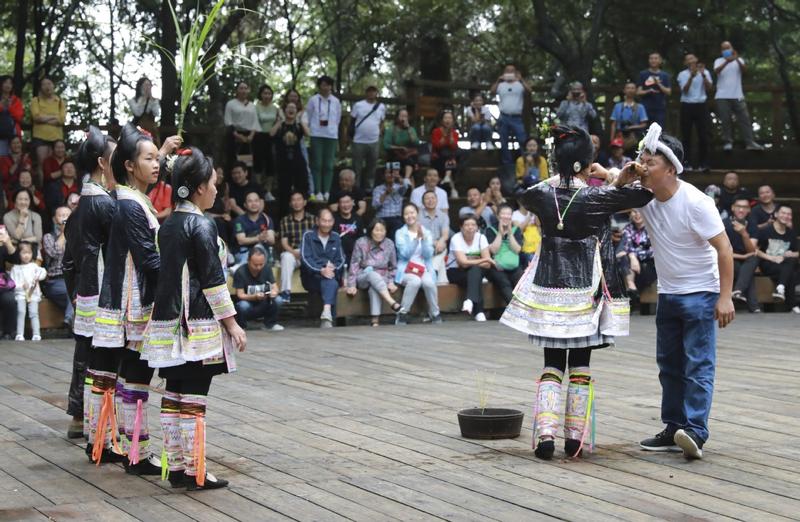 Rural tourism has helped Biasha village, known as the “last gunner tribe” in China, to emerge from poverty.

Located in Congjiang county in mountainous Guizhou province, Biasha’s nearly 2,800 villagers have largely held on to their unique traditions.

They have used guns to hunt and protect themselves for centuries. Villagers in Biasha, which means “a place with dense trees and grass”, worship trees. A village consisting entirely of members of the Miao ethnic group, it is only 7.5 kilometers from downtown Congjiang.

In the past, villagers rarely communicated with the outside world, restricted by traditional mores and geographical conditions. Now, they have become more open to society while still maintaining some of their customs, such as using sickles to give haircuts. Thus, Biasha serves as a living museum showcasing traditional Miao culture, and its uniqueness has provided opportunities for it to develop tourism.

The growth of the tourism sector has created more than 570 jobs－employing about 23 percent of Biasha’s population.

In 2014, a high-speed train service connected Congjiang with other population centers and, in 2018, Biasha attracted more attention when it was rated a national 4A tourist attraction. The village has since set up a visitor service center, a parking lot and various tourist reception facilities, while preserving its authenticity.

The growth of the tourism sector has created more than 570 jobs－employing about 23 percent of Biasha’s population.

With tourist numbers increasing, villagers have gone from being farmers to becoming tour guides, performers, waiters and salespeople, according to Guizhou Mysterious Congjiang Cultural Tourism, the travel company that manages the business there.

Other villagers have started selling handicrafts and opening bed-and-breakfast homestays, with the 24 souvenir shops and hostels now operating in the village giving a significant boost to locals’ incomes.

Gun Shuige, 33, is one of four tour guides in the village. He speaks Mandarin and started working as a tour guide eight years ago after taking professional training courses in town.

In 2015, the village started offering regular performances for visitors three times a day, including traditional dances, wedding customs and the shaving of hair with sickles. Besides being a tour guide, Gun also narrates the performances.

“I can earn a base monthly salary of 3,000 yuan (US$443), and make extra money if any travel agencies and tour groups want further explanations,” Gun said.

Meanwhile, the travel company gives 11.25 percent of annual ticket revenues to villagers for allowing it to market their traditional culture. From 2016 to 2019, the payments totaled 2.46 million yuan, it said.

The company is also responsible for organizing performances by villagers and has paid a total of 6.31 million yuan in salaries in the four years since its establishment. Other people who work as cleaners, security staff and ticket sellers have earned 2.3 million yuan during the same period, the company said.

Che Weiwei contributed to this story.