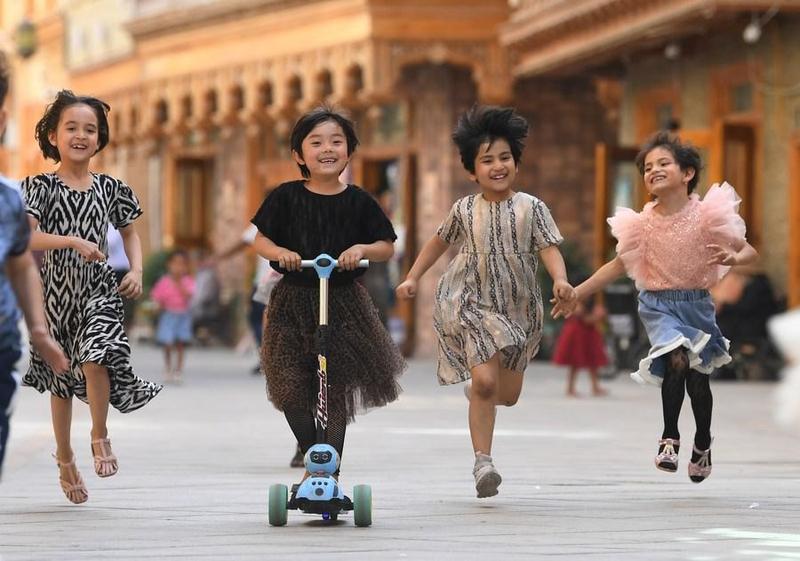 International studies experts have welcomed an in-depth report from the China Watch Institute on the Xinjiang Uygur autonomous region, saying the report not only counters the anti-China narrative of Western countries but will also help more people understand the real issues pertaining to the region.

“China has shown its sensitivity by attempting to produce a counter-narrative,” said Asif Shuja, senior research fellow at the Middle East Institute of the National University of Singapore, or NUS, referring to the report put out by China Daily’s think tank.

In the report, titled “Things to Know About All the Lies on Xinjiang: How Have They Come About?”, the institute cited statistics, historical archives and testimonies countering the West’s allegations on genocide and forced labor.

The essence of wisdom is to answer these allegations factually, courteously, and non-emotionally

Sourabh Gupta, senior fellow at the Institute for China-America Studies in Washington

The report, published late last month, discussed China’s fight against terrorism and the improvement in human rights in Xinjiang. It also highlighted the long record of the United States and other Western countries in supporting and funding separatist and terrorist groups in the region since the second half of the 20th century.

It would have been “unhelpful” if China had chosen to dismiss the whole Xinjiang issue, rather than offer a forceful rejoinder, Shuja said.

ALSO READ: China will not acquiesce to any attempt to destabilize Xinjiang

“The dialectical method is often the most dependable means of arriving at the truth, just as targeting the core issue is the best means to control a narrative built around it.”

Sourabh Gupta, senior fellow at the Institute for China-America Studies in Washington, said it is high time a Chinese think tank published a comprehensive report that can “methodically take apart the US－and the West’s－allegations-based narrative regarding developments in Xinjiang”.

Gupta said such allegations are based on “a remarkably narrow set of facts, which have been shoddily extrapolated to outrageous proportions”.

He cited the latest Country Report on Human Rights Practices issued by the US State Department that said “genocide and crimes against humanity” occurred in Xinjiang last year, yet “proceeds to provide an utter absence of proof to substantiate its incendiary charge”.

The US has often used its power “to contain any immediate or potential threat to its global influence”, Shuja said. This time the US has chosen China as its “primary enemy”, but in the process, Muslims and their sentiments have been exploited.

“History is replete with such examples, and they are all well documented. These include the support to the mujahideens in Afghanistan to counter the Soviet influence and creating conditions for the emergence of al-Qaida and the Taliban.”

But despite the rebuttals, neutralizing the anti-China sentiment may not prove easy in the current global environment.

“Exaggerations and falsehoods “are part of the West’s “political toolkit to be utilized against competitors and adversaries”, Gupta said. “The essence of wisdom is to answer these allegations factually, courteously, and non-emotionally.”

Mustafa Izzuddin, visiting professor at the international relations department of Islamic University of Indonesia in Yogyakarta, said the institute report “helps contribute to the ongoing debate on Xinjiang from the Chinese point of view”.

Among the salient points of the think tank’s report is how the US and other Western countries are supporting separatist and terrorist activities in Xinjiang to destabilize and contain the development of China.

Henelito Sevilla Jr, associate professor and West Asia coordinator for the Asian Center of the University of the Philippines, said the US and some Western countries often use the “existing Western-created legal mechanisms and institutions to direct the behavior of other countries that do not share similar values, institutions and political ideologies with them”.

This has happened in countries such as Afghanistan, Iran, Iraq and Syria where US and British interventions have displaced thousands of people and worsened security conditions, he said.

The West’s narrative on Xinjiang aims to create “negative publicity “against China, he said, and is “aimed at campaigning support from the international community against China as a rising global power”.

Shuja said the US has often used “divide and rule” as a strategic tool, and is using the same tactic again on Xinjiang given the region’s crucial role in the Belt and Road Initiative.