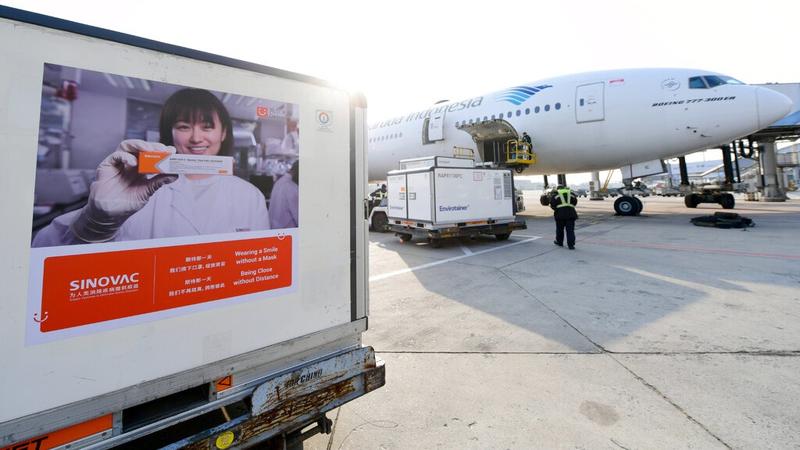 In this Dec 6, 2020 file photo released by the Indonesian presidential palace, an experimental coronavirus vaccine made by Chinese company Sinovac waits to be loaded onto an Indonesian plane at Beijing International Airport, in Beijing, China. (PHOTO / INDONESIAN PRESIDENTIAL PALACE VIA AP)

BEIJING – Chinese pharmaceutical company Sinovac Biotech Ltd is ramping up the production of CoronaVac, an inactivated COVID-19 vaccine, to ensure global supply, according to Yin Weidong, chairman and CEO of the company.

On Dec 15, 2020, China officially launched the COVID-19 vaccination program for key groups of people aged between 18 and 59 who have a high risk of infection

“Sinovac has received vaccine orders from Brazil, Indonesia, Turkey, Chile and other countries and regions, and we are making every effort to expand the production capacity,” said Yin in an interview with Xinhua News Agency. “We hope the vaccine will protect more people around the world.”

The Sinovac vaccine has been approved for emergency use in several countries, including China, Indonesia, Brazil and Chile, according to Yin.

Yin added that the company has constructed a second production line, which will start operation in February, increasing its annual production capacity to 1 billion doses.

Sinovac will export semi-finished jabs to some countries, and help build local filling and packaging lines in importing countries to improve the production capacity and efficiency, Yin said.

“On the basis of an annual output of 1 billion doses, we will continue to expand production capacity. We are facing uncertainties related to the coronavirus pandemic and demand for vaccines, which shall not be responded to with the usual demand-supply business model alone. Vaccines are public goods and we should shoulder social responsibilities,” Yin said.

The phase-3 clinical trials of the Sinovac vaccine are being mainly conducted in Brazil, Indonesia and Turkey.

On Dec 15, 2020, China officially launched the COVID-19 vaccination program for key groups of people aged between 18 and 59 who have a high risk of infection. Over 15 million doses have been administered in China, according to the country’s health authorities

ALSO READ: Emergency use of coronavirus vaccines in China authorized

“It’s normal to get varying results in different countries, and the clinical trials are influenced by multiple factors,” Yin said, adding that all the participants in the phase-3 clinical trials in Brazil are medical workers in high-risk environments who might be attacked by the virus many times.

“The vaccine is expected to provide better protection for the general population,” Yin said.

“Combining the data from clinical trials in the three countries, we have stronger confidence in the safety and efficacy of the vaccine,” Yin said.

“In collaboration with the Institute of Laboratory Animal Sciences under the Chinese Academy of Medical Sciences, we found that the serum of volunteers who received the Sinovac vaccine can neutralize the variant strain found in Britain. We are also studying the protection offered by the vaccine against the variant strain found in South Africa and will share the results in a timely manner,” Yin said.

On Dec 15, 2020, China officially launched the COVID-19 vaccination program for key groups of people aged between 18 and 59 who have a high risk of infection. Over 15 million doses have been administered in China, according to the country’s health authorities.

With more well-rounded clinical trial data and increasing vaccine supply, China will gradually include those aged above 60 to the vaccination program, according to the National Health Commission.

READ MORE: WHO working with Sinopharm, Sinovac ahead of emergency use

Many foreign leaders have been inoculated with China’s COVID-19 vaccines, including Indonesian President Joko Widodo and Turkish President Recep Tayyip Erdogan, who both received the Sinovac vaccine.

This shows international confidence in Chinese-made vaccines, Yin said, adding that it is a sign of recognition for their cooperation with China in phase-3 clinical trials.

“I was also touched by a photo showing indigenous people in Brazil dressed in traditional costumes receiving a Sinovac vaccine shot. The indigenous population in Brazil is suffering from the coronavirus pandemic. China pledges that COVID-19 vaccines should be public goods, and we hope that they are used to protect all groups of people,” Yin said.