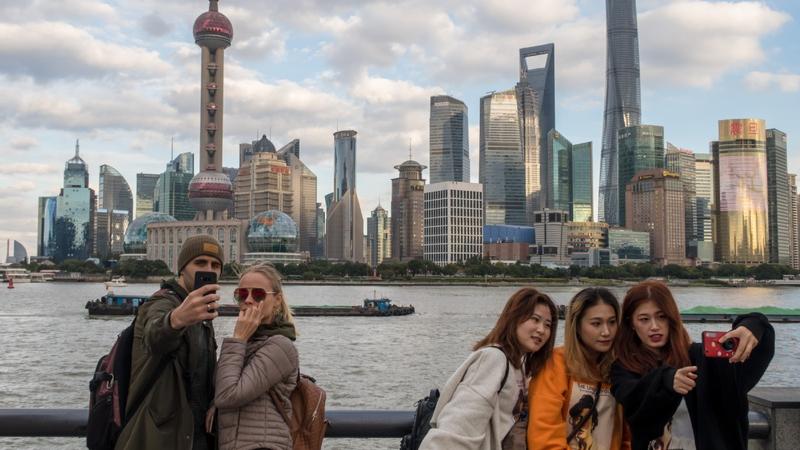 The undated photo shows tourists pose for photographs on the Bund, a major scenic spot on the Huangpu River, in Shanghai. (WANG GANG / FOR CHINA DAILY)

Shanghai’s Huangpu district, which has many of the city’s landmarks－including the Bund, Nanjing Road Pedestrian Street and Yu Garden－has been using a smart police initiative that has improved security for crowds.

Over the past May Day holiday from May 1 to 5, Shanghai received nearly 17 million tourists, with many of them visiting those iconic scenic spots in Huangpu.

At the Bund Police Station, 10 screens showed real-time scenes of the passenger and vehicle flows at core areas and intersections on the Bund.

It uses the most cutting-edge technology and is able to evaluate passenger flow in a fairly fine manner.

Liu Haibo, director of the police station, said the intelligent platform has been constantly updated.

“It uses the most cutting-edge technology and is able to evaluate passenger flow in a fairly fine manner. This provides technical support for the commanders to predict the situation in an accurate and efficient way and allows police to adjust the command plan at any time,” he said.

A highlight attraction for tourists to the Bund was the light show presented every half an hour between 6:30 pm and 11:30 pm. Each light showed lasted five minutes.

“But still the changing situations on the spot relies a lot on the real-time direction and the police officers,” he said.

Li Qiang, Party secretary of Shanghai, said in September 2018 that the smart police initiative will effectively solve the problems of public safety and management in a mega city like Shanghai.

“The police department should effectively improve the ability of data utilization to ensure security and serve the people. The smart police initiative can provide strong support for the safe and orderly operation of the city and the improvement of social governance capability,” he said.

A third-party report published ahead of the inaugural People’s Police Day, which falls on Jan 10, showed that Shanghai residents’ sense of security and their satisfaction with the police have increased for eight consecutive years.

Police attributed the achievement to the hard work of the entire police team as well as the smart police initiative.

For instance, innovative technology used at the anti-fraud center helped inform residents of a telephone scam by making 660,000 phone calls last year. This in turn prevented economic losses of 1.21 billion yuan (US$188 million), according to the police.

The police also reported that the number of telephone scams last year decreased 8.4 percent year-on-year, while the number of such cases that were solved rose by 10.9 percent.

Police data shows that the number of burglaries in the city last year also decreased by 72 percent year-on-year.

The smart police system has also created safer and smoother traffic as it can precisely predict passenger and traffic flow and take measures to prevent congestion. It plays an important role, especially on holidays.