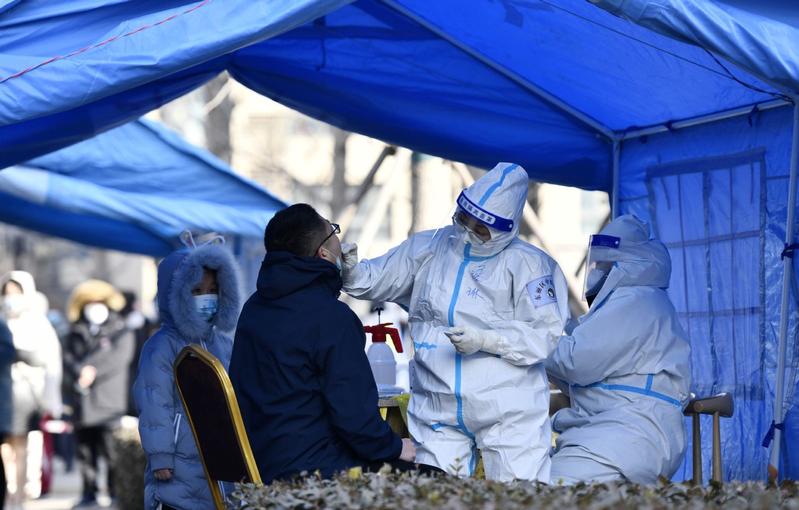 A medical worker takes a swab sample from a citizen for nucleic acid test at a testing site in Dongli district in North China’s Tianjin, Jan 15, 2022. (PHOTO / XINHUA)

The World Health Organization has denied claims that some countries implementing strict COVID-19 measures－such as a “zero-COVID policy”－have created higher risks for their population while some others have given up their fight against the highly transmissible Omicron variant.

Mike Ryan, executive director of the WHO Health Emergencies Programme, said on Tuesday that the starting conditions of the pandemic set the opportunities that the countries had.

Many Asian countries took aggressive measures at the very beginning to keep their numbers very low, he said, so it was possible for them to implement a zero-COVID policy, while many countries with high and extensive transmission found it very difficult to take such an approach.

On the claims that countries with the approach are now at risk, Ryan said that he would rather be in the situation of such countries, citing South Korea, which has implemented strict measures, and has low infections, a high vaccination rate and a death toll of 6,300 from the virus over the past two years.

“I want to be in that group if I am a country,” Ryan said at a news conference in reply to a question from China Daily.

Ryan added that if that means an increased risk because of the many susceptible people that haven’t been vaccinated, he would endeavor to rectify that situation and plug the gap.

“I would much rather be in a situation where the vast majority of my population had never got COVID-19, has now got a high level of vaccine protection, and may have a slightly higher risk now because we didn’t have massive COVID-19 over the last two years,” he said.

Ryan noted that the zero-COVID policy has not been implemented in many countries because they realized that it’s impossible to get to zero unless the whole world does.

He said that this approach has been used to suppress the virus, protect the population with vaccinations, conduct very intensive surveillance, and has a very flexible system of public health and social measures and a dynamic flexible response aimed at keeping the situation to the minimum and the health system free of severe diseases. This approach also uses vaccination to fill the immunology gaps among the population.

“If that’s the zero-COVID policy, it has my full support,” he said.

COVID-19 had infected over 323 million people and killed 5.5 million worldwide as of Sunday, the WHO said on Tuesday. It reported 18 million new cases last week, a 20 percent jump from the previous week. New deaths totaled 45,000, close to the figure in the previous week.

The agency warned on Tuesday that the pandemic is far from over, as France, Germany and Brazil posted record numbers of infections.

The Omicron strain has spread unabated around the world, pushing some governments to impose fresh measures while speeding up the rollout of vaccine booster shots.

“This pandemic is nowhere near over,” WHO Director-General Tedros Adhanom Ghebreyesus told reporters in Geneva.

Europe is at the epicenter of alarming new outbreaks, with Germany’s cases soaring past 100,000 and France reporting nearly half a million cases on Tuesday.

Tedros warned against dismissing Omicron as mild, as the dominant strain continues to flare up in new outbreaks from Latin America to East Asia after it was first detected in southern Africa in November.

“Omicron may be less severe, on average, but the narrative that it is a mild disease is misleading,” he said.

Europe reported 5 million cases last week and the WHO has predicted that Omicron could infect half of all Europeans by March, filling hospitals across the continent.

Germany on Tuesday reported 112,323 coronavirus cases and 239 deaths, officials said, with Omicron found in more than 70 percent of the infections.

Hopes for Europe’s tourism recovery remain bleak, with the World Tourism Organization saying on Tuesday that foreign arrivals will not return to pre-pandemic levels until 2024 at the earliest, despite a rise of 19 percent last year compared with 2020.

Agencies and Cui Haipei in Beijing contributed to this story.