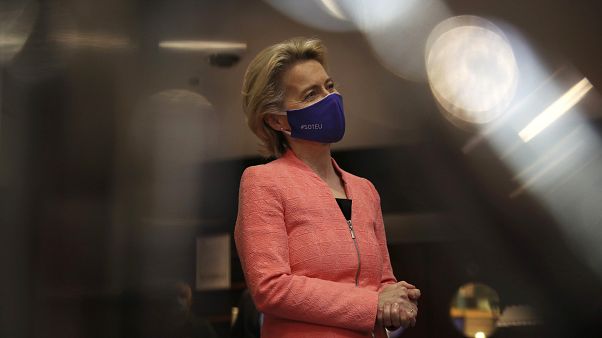 The EU will look at giving itself new powers to impose sanctions in the face of human rights abuses, Ursula von der Leyen has told Euronews.

Von der Leyen made the remark responding to a question about Belarus, which has been rocked by weeks of protests over a disputed presidential election.

Long-time leader Alexander Lukashenko was announced as the winner with an 80% vote share, but his critics say the election was rigged in his favour.

The protests have raged in the capital city Minsk and been violently put down by the police and security forces.

Asked about the EU response to Belarus, European Commission President Von der Leyen said EU countries were discussing “sanctions for those who are responsible for the violence after the elections that were neither free nor fair, and where people peacefully took to the streets”.

She said Belarus had highlighted the need for new powers to respond faster with sanctions. The EU chief said the European Commission would propose its own “so-called Magnitsky Act”, referring to the law in the US that barred 18 Russian officials believed to have been involved in the mistreatment and death of a Russia financier, Sergei Magnitsky, who died in police custody in 2009 aged just 37..

The law was expanded in 2016 and has since been used to bar officials from China, the Dominican Republic, Gambia and even the US’s NATO ally, Turkey.

European countries can impose sanctions individually on other nations and a number of Baltic states have already done so on Belarus. But the bloc has not acted collectively yet on the issue.

Members of the last European Parliament backed a resolution calling for one in March 2019.

Asked whether the EU had considered sanctions against Turkey over its recent spat with Greece over drilling rights in the Mediterranean Sea, Von der Leyen said the matter “was not discussed”.

Von der Leyen was also asked about the response to the COVID-19 pandemic and the fact that many states were taking their own approach to combatting the virus, rather than a united pan-European response. But she said the two were not mutually exclusive.

“It is very clear between the Members States and the Commission that we are putting forward recovery plans that will be individual, national recovery plans, but they respect and implement our common perspectives,” Von der Leyen said.