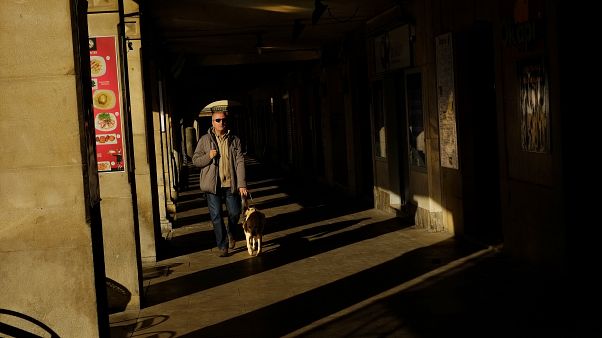 Thousands of visually impaired people have been left exposed to COVID-19 because of flaws in Spain’s official tracking app, it has been claimed.

RadarCOVID, which was launched at the end of June, is not accessible on an iPhone to people with sight problems.

Spain has more than 72,000 people classified as visually impaired and critics say it puts everyone at more risk.

“If I have the application and cannot use it, I may have come into contact with positive cases and not know it, and I would not quarantine.

“If I test positive, since I can’t communicate it to other people, everyone would lead a normal life, and we could all infect others unintentionally.”

The app uses Bluetooth technology to trace people COVID-19 carriers have come into contact with.

The infected person is given a code to enter into the app, which then communicates with all the people that have potentially come into contact with him or her.

But RadarCOVID is not fully accessible to screen readers, the technology that reads out a website or app’s text for the blind or partially sighted.

“The privacy policy cannot be accepted, because there is no way to focus the checkbox with the screen reader and therefore it cannot be checked. This is the virtually insurmountable barrier without sighted help.

“Once we achieve this, the application is still quite inaccessible. It has three tabs, and they are unlabelled images, so the screen reader reads tab, tab, tab, but you don’t know what you are touching.”

In addition, unlabelled buttons and fields make it difficult to enter the code that triggers the app to warn your contacts you have COVID-19.

It all comes as Spain — one of the worst-hit countries in Europe — is seeing a spike in COVID-19 cases that researchers claim is evidence of a second wave.

Angel López Hernanz, a family doctor in Spain, said like all tracking apps, RadarCOVID bases its usefulness on the number of people who use it. He said the potential omission of thousands of partially sighted people should not be tolerated.

“If an application, which is official, does not meet accessibility standards, I believe it should be removed, or its accessibility levels implemented as soon as possible,” he said.

“This is an act of discrimination by the government, which has forgotten that people with disabilities exist,” Delicado told Euronews.

He added the government’s actions, coupled with the lack of awareness in educational institutions, mean that accessibility is mostly ignored.

“It is a general failure of society that leaves us exposed,” he concluded.

The government hired a company, Indra, to take care of the development of the app, but it’s unclear whether accessibility was ever a priority.

“Administrations are not obliged to make their applications accessible until next year, and private companies, except those that comply with the requirements of the LSSICE, do what they want because the technical regulation of accessibility is pending since 2013, despite the fact that the disability law itself established a two-year deadline for its development,” said Iván Novegil, a visually impaired journalism student at the University of Santiago.

Accessibility is a ‘necessary commitment’

The Spanish government said it hopes the app will be accessible by mid-September.

“Accessibility is not only a pending task, but a necessary commitment, and that is why the Secretary of State herself said that even though the version of the application for the pilot carried out in La Gomera did not comply with the standards regarding accessibility for people with some kind of disability, the application would be totally accessible as soon as the implementation process was completed,” said Borja Ventura, head of communication for the Secretary of State for Digitalisation and AI.