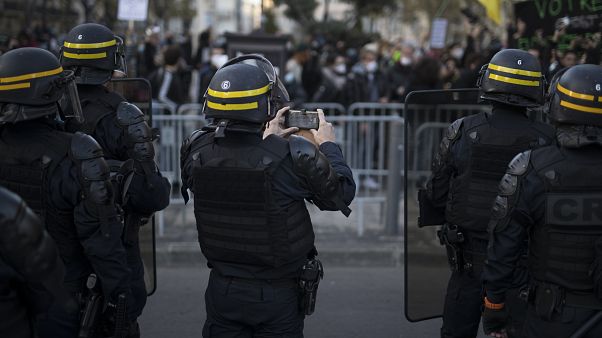 Brussels reminded France on Monday that journalists must be able to “work freely and in full security”, warning that it will examine the country’s controversial security bill to ensure it complies with EU law.

The bill is expected to go before the country’s senate in January, and must also receive a referral from the Constitutional Council before it comes into effect.

The proposed legislation would make it illegal to share images of law enforcement officers for “malicious purposes” with anyone falling foul of it facing up to one year in prison and a €45,000 fine.

The bill, introduced by President Emmanuel Macron’s centrist majority, has been sharply criticised by journalists and rights groups who argue that it would curtail press freedom and lead to less police accountability.

Thousands of people also took to the streets across the country over the weekend to denounce it, despite a lockdown imposed to curb the spread of the COVID-19 pandemic.

A spokesman for the European Commission stressed on Monday that “when member states are drafting security legislation, they must respect the principle of proportionality and find the right equilibrium between guaranteeing public security and the protection of citizens’ rights and freedoms including freedom of expression, press freedom.”

“The Commission refrains from commenting on draft laws but it goes without saying that during a time of crisis it is more important than ever, and we have said this often in different contexts, that journalists can do their work freely and in full security.

“As always the Commission reserves the right to examine the final legislation in order to verify its conformity with the law of the European Union,” he added.

The law initially demanded that any images of police released by the press or on social media be blurred so that officers are not identifiable to “protect those who protect us”.

Statements from ministers calling for journalists to be accredited by police in order to cover demonstrations led to further alarm.

France’s human rights ombudsman, Claire Hédon, said that the draft bill “raises considerable risks of infringement of several fundamental rights, in particular, the right to privacy and freedom of information”.

The law was then amended to penalise those who release image in which police officers are identifiable “with the intent to cause (them) harm.”

But groups representing journalists argued on Tuesday in a letter to Prime Minister Jean Castex that “the vague and very broad definition of the crime thus created would have deleterious effects on journalistic and editorial work.”

“We fully understand and share the concerns of public authorities regarding the effectiveness of the fight against terrorism and the protection of law enforcement agencies. But these do not in any way require altering the conditions of exercise of the professions of editor and journalists, nor the texts which govern them.

“We mustn’t confuse hate campaigns launched by some on social media and the journalistic work carried out by professionals. It should be reminded that publishers are responsible for what they publish, both morally and legally,” they added.