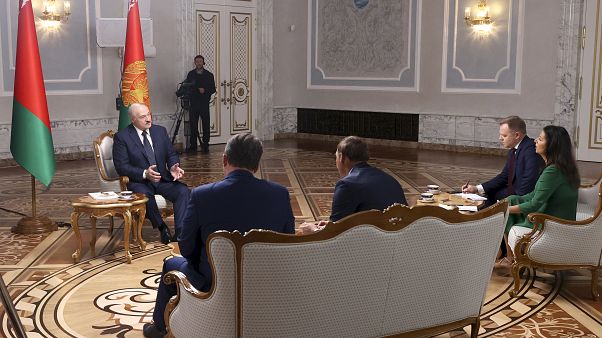 In Belarus, opposition activists are under increasing pressure as the country marks a month since the start of massive protests against President Alexander Lukashenko.

Efforts to quell the demonstrations have gone nowhere – now Lukashenko is looking to Moscow for support. He’s expected to travel to Russia next week for talks with Vladimir Putin.

This visit to his “elder brother”, as Lukashenko recently called President Putin, is going to be his first foreign trip after the elections. Putin was the first one to congratulate Lukashenko after he declared victory and it’s clear the Kremlin won’t hold talks with the Belarus opposition.

But analysts say that in reality talks in Moscow are going to be extremely tough. Why? Their main goal is to discuss the price that Lukashenko will have to pay for Russian support.

And President Putin is expected to ask for a lot.

“Russia is just waiting for him to somehow open his arms, to be more compliant so that it would be possible to write a roadmap for integration, complete absorption (of Belarus by Russia),” says Andrei Kolesnikov of the Moscow Carnegie Center.

“We need to understand that, I don’t know if Lukashenko understands that now, that of course Moscow would like to see someone like Lukashenko in his place, but of a more modern type, more accommodating, in fact – a puppet. Even cornered, Lukashenko does not look very much like a puppet, he is too unpredictable. This is a big difficulty for Moscow.”

Analysts in Russia say that for the Kremlin, any military intervention in Belarus is the worst-case scenario that has never been seriously on the table. In reality, it wants to act in a different way.

“Lukashenko has so far been very successful in leading the Kremlin and Putin personally by the nose, but now the Kremlin believes that he has been pinned to the wall,” political analyst Valery Solovei told Euronews.

“Putin wants to gain control over Belarus, he is not very interested in Lukashenko. The Kremlin would like to completely economically absorb Belarus. That is, politically, it can remain a sovereign country, but according to the Kremlin, it should lose economic sovereignty.”

So while Alexander Lukashenko wants to keep the power, Vladimir Putin, analysts say, wants him to hand over a huge part of this power to Russia. Turbulent times ahead – even for brothers.