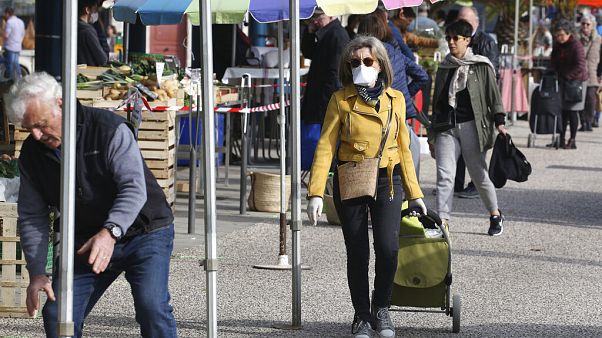 Bars will close in two additional French cities amid rising COVID-19 hospitalisations and a significant increase in cases.

Toulouse and Montpellier will on Tuesday see their alert level for COVID-19 raised to the maximum, joining many of France’s other cities: Paris, Marseille, Lyon, Lille, Saint-Etienne, and Grenoble.

It comes after the country recorded a record number of new cases on Saturday: nearly 27,000 in 24 hours.

Prime Minister Jean Castex urged French people during an interview on Monday to limit the number of people they invite into their homes.

He said that France was in the midst of a second wave of the virus, and said people needed to be more vigilant. Castex also said that a new version of the country’s StopCovid phone application would be released next week.

French media have reported that President Emmanuel Macron is likely to address the country later in the week.

Toulouse Mayor Jean-Luc Moudec said that he did not approve of the decision to close bars in his city from Tuesday, one of the main restrictions for areas at the maximum alert level.

“I consider that most of the spread of the virus takes place in the private sphere. So let’s stop bullying an economy that’s already in bad shape,” Moudec said in a tweet.

Many local officials have protested the government’s decisions after their cities were assigned higher alert level – Marseille’s elected officials, in particular, fought the government on restrictions.

Eventually, restaurants were allowed to reopen in the city after the sector negotiated with the government agreeing to implement new sanitary measures, including limiting groups to six people.

The head of the regional health agency in Ile-de-France, the region where Paris is located, called on people to “drastically reduce” social interactions.

“Only millions of individual decisions can now reverse the virus,” Aurélien Rousseau tweeted.

There are nearly 8000 people hospitalised in France, the highest number of people since the end of March when the country was in lockdown. Hospitalisations are, however, rising more slowly than they did in March.

France has the second-most COVID-19 cases in Europe after Spain, where Madrid recently entered into a state of emergency.

Meanwhile, many European countries are trying to thwart rising cases including the United Kingdom and Germany.

“We are at a tipping point similar to where we were in March; but we can prevent history repeating itself if we all act now,” England’s Deputy Chief Medical Officer Professor Jonathan Van-Tam wrote on Sunday.

Prime Minister Boris Johnson is set to unveil a three-tiered alert system on Monday to outline what rules will be implemented when cases and hospitalisations rise locally.

Germany, which has been seen as a success story in Europe with under 10,000 deaths, now has curfews in Berlin and Frankfurt after registering more than 4,000 cases in a day.

On Friday, Chancellor Angela Merkel appealed to younger people, saying: “Everything will come back – partying, going out, having fun without corona rules. But now, something else counts – mindfulness and cohesion, the simple basic rules of distance, hygiene and wearing a mask.”