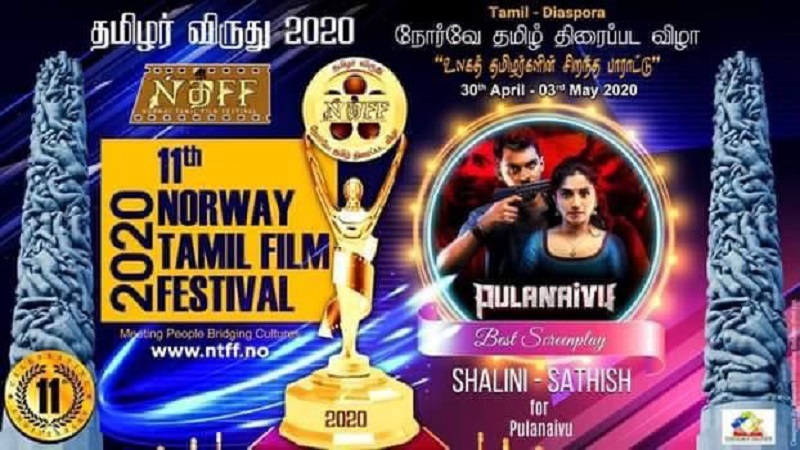 KUALA LUMPUR, Sept 17 — Locally-produced Tamil film Pulanaivu has bested a list of many Tamil movies from around the world and won the Best Crime Thriller Feature Film award at the Toronto Tamil Film Festival 2020 (TTFF 2020).

Starring Malaysian singer and actress Datin Seri Shaila V, Pulanaivu  —  which means “intelligence” or “investigation”  —  focuses on a female cop (played by Shaila) in pursuit of a murderer at a college.

In an Instagram post recently, Shaila announced the good news about winning the recognition at TTFF 2020 and congratulated the team behind the movie.

It’s an honour and an overwhelming moment to announce that Pulanaivu has received the *Best Crime Thriller Feature Film Award* in Toronto International Tamil Film Festival, competing along other awesome tamil films from all over the world. We would like to take this opportunity to thank every individual who has been directly or indirectly part of this project, not forgetting our technicians, cast and most importantly our loving audience who have supported this film since day one. We are more than glad to share this joy and gratitude infinitely. swipe ❤️❤️❤️❤️❤️❤️❤️❤️ #pulanaivu #shaibhavision #storyfilms #followshalini #torontotamilinternationalfilmfestival #finas

Speaking to Malay Mail, Shaila expressed her excitement for winning the international recognition and said she was proud of taking a locally-produced film to such levels.

“It’s truly an amazing feeling to see our movie is being watched and awarded [abroad].

“It marks the hard work and uniqueness that this crime thriller carries,” she said.

Shaila hoped that more local Tamil movies would make it outside Malaysia and receive international attention.

“This award is very special to me as we were selected from the list of many great Tamil movies from all over the world.

“Kudos to directors Shalini, Sathish as well as the whole cast and crew of Pulanaivu for this success,” she added.

Among the juries that judged the festival were notable filmmakers from India, including award-winning director Vetri Maaran as well as composer, actor and producer GV Prakash.

The film was awarded Best Actress for Shaila and Best Screenplay for Shalini and Sathish.

However, due to the Covid-19 pandemic and travelling restrictions, both award ceremonies have been postponed to a later date.