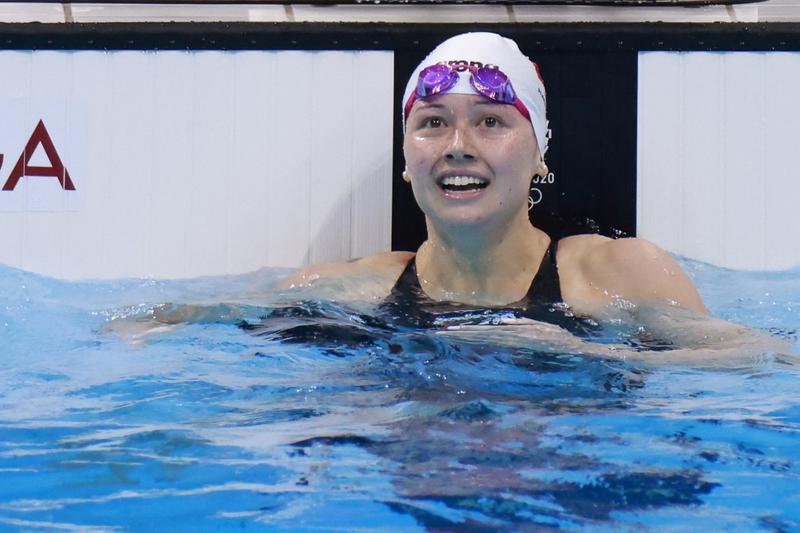 Hong Kong’s Siobhan Bernadette Haughey reacts after winning silver in the final of the women’s 100m freestyle swimming event during the Tokyo 2020 Olympic Games at the Tokyo Aquatics Centre in Tokyo on July 30, 2021. (ODD ANDERSEN / AFP)

Haughey’s silver in the women’s 100-meter freestyle made the 23-year-old the first Hong Kong athlete to claim two medals at the Olympic Games. She secured a silver medal in Wednesday’s 200- meter freestyle, and set Asian records in both events.

Haughey also qualified for the 50-meter freestyle semifinal, but withdrew from the race on Friday evening because of injuries, including leg and hip pain during the 200-meter final. Hong Kong has bagged three medals at the Tokyo Olympics by Friday, ranking 24th among 206 delegations in the medal tally. The other medal was a historic gold won by fencer Edgar Cheung Ka-long in the men’s individual foil on Monday.

Before 2021, the city had secured only three medals in Olympic history: a gold medal for windsurfer Lee Lai-shan in 1996 in Atlanta, a silver for men’s table tennis doubles team Ko Lai-chak and Li Ching in 2004 in Athens, and a bronze for cyclist Lee Waisze in 2012 in London.

Hong Kong’s excellent showing in Tokyo has created an Olympic craze throughout the city. Crowds of residents gathered in front of giant screens at shopping malls to support their Olympic idols.

Olympian City, a shopping mall in West Kowloon, was packed with cheering crowds on Friday morning, among them many young sports fans. 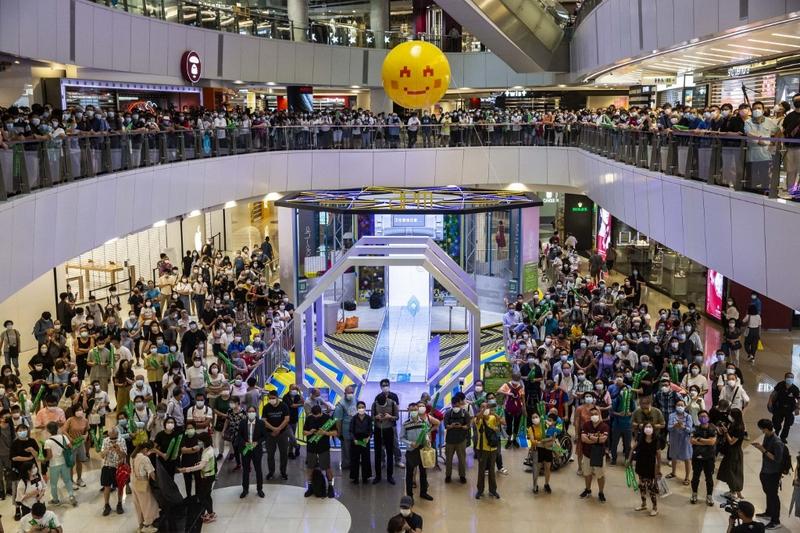 People in a shopping mall come to watch Siobhan Haughey in Hong Kong on July 30, 2021, as she goes on to win a silver medal in the women’s 100m freestyle at the Tokyo Olympics. (ISAAC LAWRENCE / AFP)

A 13-year-old swimming enthusiast, who gave his surname as Xia, said he was impressed by Haughey’s record-breaking performance in the 100-meter final.

While he lagged far behind professional athletes, Xia said, Haughey has set a model for him to aspire to, and her performance is encouraging him to make a greater effort in swimming.

Another resident surnamed Wong said Hong Kong’s Olympic heroes are stimulating the young generations’ interest in sports. Her 5-year-old son wanted to learn fencing after watching Cheung’s win. “But all the fencing training camps I contacted have been fully booked,” Wong said.

Cliff Wong Tsan, principal of Hong Kong Fencing School, said that Cheung and Haughey not only play in the same league as the most competitive athletes in the world, but also serve as role models for the city’s youngsters.

Wong said he believes their cando spirit will spur on many young people, including athletes, to pursue their dreams or help them to set their own life goals.

In a phone interview, Paul Chan Po-luk, principal tutor of the Hong Kong Swimming Teachers’ Association, said that he was proud of Haughey’s outstanding performance in Tokyo, which shows that Hong Kong’s elite athletes are among the most competitive in the world.

Chan said he thinks it is time to promote public participation in sporting activities, particularly among young people, through more sports facilities and physical education teachers.

Chloe Xu contributed to this story.