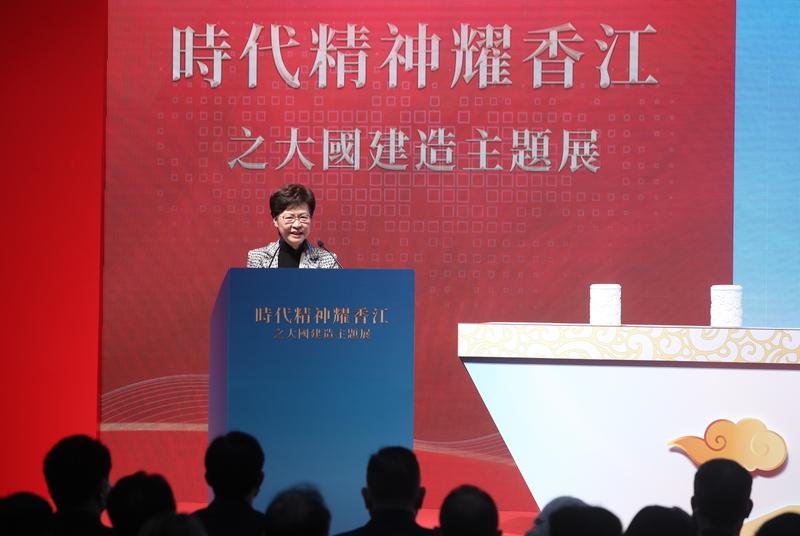 Hong Kong Chief Executive Carrie Lam Cheng Yuet-ngor delivers a speech at the opening ceremony of an exhibition highlighting the long history of Chinese architecture and the great achievements of Chinese construction in the new era on Oct 25, 2021. (CALVIN NG / CHINA DAILY)

Officials addressing the opening ceremony of a week-long exhibition featuring the nation’s architectural achievements said they hope the event will boost Hong Kong residents’ understanding and recognition of its place in the nation.

From Monday to Saturday, the exhibition will showcase the nation’s history in architecture and world-class infrastructure projects to the Hong Kong public.

Such cohesiveness is what Hong Kong currently needs to facilitate the city in better integrating into the development of the Guangdong-Hong Kong-Macao Greater Bay Area, Lam added.

Hong Kong’s major infrastructures, such as Hong Kong-Zhuhai-Macao Bridge, Hong Kong Palace Museum and the North Lantau Hospital Hong Kong Infection Control Centre, built to address the COVID-19 pandemic, are also among the projects being exhibited to demonstrate the close bonds between Hong Kong and the nation. Lam said the infection control center, built with the nation’s full support, has been a great help to the city’s pandemic fight.

“The hospital, with over 800 isolation beds, was built in four months, injecting a shot in the arm for the city’s battle against the pandemic,” Lam said.

Lam also said the government will continue to invest in infrastructure, adding Hong Kong’s annual expenditure on capital works is expected to exceed HK$100 billion in the coming years.

She encouraged Hong Kong residents to proactively check out the exhibition.

Lu Xinning, deputy director of the Liaison Office of the Central People’s Government in the Hong Kong Special Administrative Region, said the exhibition, part of a series of events held by a delegation of top national construction experts visiting Hong Kong this week, will showcase the nation’s dazzling architecture, which is the product of a stronger, wealthier and more creative country. 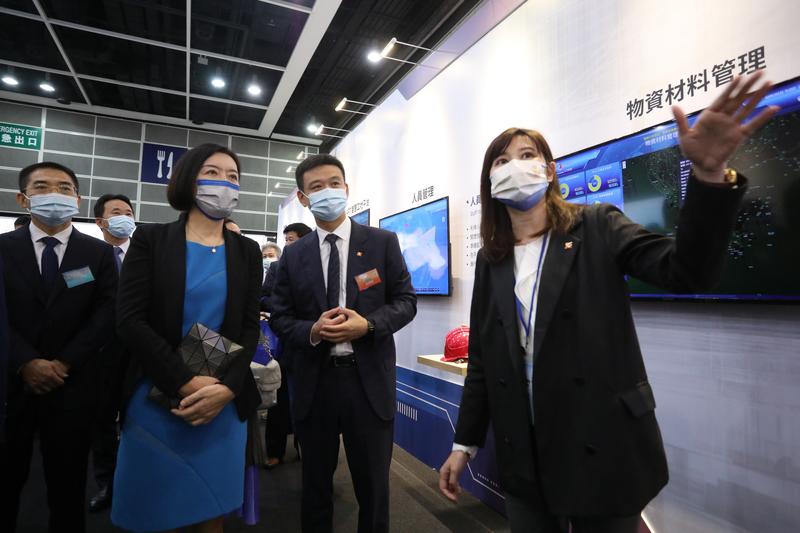 Lu Xinning, deputy director of the Liaison Office of the Central People’s Government in the Hong Kong Special Administrative Region, joins the tour after the opening ceremony of a six-day exhibition in Hong Kong highlighting the long history of Chinese architecture and the great achievements of Chinese construction in the new era on Oct 25, 2021. (CALVIN NG / CHINA DAILY)

Lu revealed there would be more top-notch experts from other sectors coming to the city to meet with local residents to bolster the public’s recognition and understanding of the country.

In June, the nation’s top aerospace scientists visited the city and held an array of events, including giving talks to young students and bringing lunar soil collected by China’s Chang’e-5 probe to Hong Kong for display.

In early September, Chinese astronauts Nie Haisheng, Liu Boming and Tang Hongbo on board the Tiangong space station had a video call with Hong Kong youth.

Construction-themed activities, the third series of events held to fortify the public’s understanding of the country, will inspire Hong Kong residents to build up their national identity and help the city better position itself as a hub for arts and cultural exchange between China and the rest of the world.

Lu said architecture in the city has combined Chinese aesthetics with construction techniques, noting the Bank of China Tower designed by renowned architect I.M. Pei. The trunk of the building, inspired by a bamboo plant, symbolizes growth and hopes in Chinese culture as it twists upward.

Hong Kong can only be the hub for arts and cultural exchanges between China and the rest of the world when it can integrate the world’s popular culture with Chinese civilization, Lu said.

She expressed her hopes the exhibition, which also presents Hong Kong’s architectural development, will inspire Hong Kong to better define its cultural characteristics and build its self-identity.