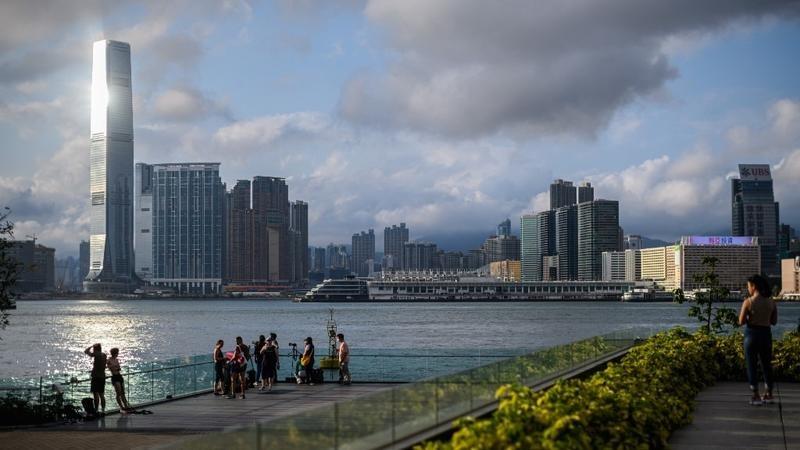 People gather to watch the sunset as they stand on a viewing platform in Tamar Park overlooking Victoria Harbour and the Kowloon skyline in Hong Kong on May 5, 2020. (ANTHONY WALLACE / AFP)

Spokesperson Wang Wenbin made the remarks at a press conference when responding to a question on the report, saying that the so-called “Six-monthly Report on Hong Kong” has, as always, confused right and wrong, and is full of ideological bias.

Wang said that the unfounded accusations against China’s policies in Hong Kong made by British Foreign Secretary Dominic Raab in the foreword of the report again grossly interfered in Hong Kong affairs and China’s internal affairs. “We strongly condemn and firmly oppose it,” he said.

Since Hong Kong’s return to China, the Chinese central government has been governing the Hong Kong Special Administrative Region (HKSAR) in accordance with China’s Constitution and the HKSAR Basic Law, Wang said. He added that the policy of “one country, two systems,” “Hong Kong people administering Hong Kong,” and a high degree of autonomy have been faithfully implemented, and Hong Kong residents’ lawful rights and freedoms have been fully guaranteed according to law.

“All the things we do, including the enactment of the national security law in Hong Kong and the improvement to the electoral system of Hong Kong, are aimed to uphold and improve the institution of ‘one country, two systems,’ ensure its steady and sustained implementation, and realize lasting peace, stability and prosperity in Hong Kong,” he said.

The improved electoral system of Hong Kong fully implements the principle of “patriots administering Hong Kong,” better reflects the broad and balanced political participation of Hong Kong residents and better accommodates the interests of all social strata, all sectors and all aspects, he said.

Wang said that the report just released by the International Monetary Fund (IMF) reaffirmed Hong Kong’s status as an international financial center and cast a vote of confidence in Hong Kong’s development prospects.

He said the so-called British report ignored these basic facts and spared no effort to attack and smear the Chinese central government and the HKSAR government. While claiming to care about Hong Kong’s democracy and Hong Kong residents’ rights, what Britain really wants is to meddle in Hong Kong’s politics and China’s domestic affairs, and to disrupt Hong Kong.

“We urge Britain to abide by the international law and the basic norms governing international relations, face up to the reality that Hong Kong has returned to China for 24 years, give up its old colonial dreams, abandon double standard, and stop releasing relevant reports,” Wang said.

“Britain must also stop interfering in China’s internal affairs including Hong Kong affairs in any way, and do more things that are conducive to Hong Kong’s prosperity and stability, and the development of China-Britain relations,” he said.

The UK has no sovereignty, jurisdiction or right of ‘supervision’ over Hong Kong.

Spokesperson for the Chinese embassy in Britain

Responding to a question about the report issued by the British government on Thursday, the spokesperson said the so-called “China breaches the Sino-British Joint Declaration” is a non issue, and the core content of the Sino-British Joint Declaration is to ensure China resumes exercise of sovereignty over Hong Kong, and does not give the UK any responsibility over Hong Kong after the handover.

“The UK has no sovereignty, jurisdiction or right of ‘supervision’ over Hong Kong. The Chinese Government governs Hong Kong in accordance with the Constitution of China and the Basic Law of the Hong Kong SAR, not the Sino-British Joint Declaration. No foreign country has the right to take the Joint Declaration as an excuse to interfere in Hong Kong affairs, which are China’s internal affairs,” said the spokesperson.

Furthermore, the allegation that the Chinese government “suppresses the rights and freedoms” of Hong Kong residents confuses right and wrong, the spokesperson said.

Since resuming exercise of sovereignty over Hong Kong, China has fully and accurately implemented “one country, two systems”, “Hong Kong people administering Hong Kong” and a high degree of autonomy, and Hong Kong residents have been enjoying unprecedented rights and freedoms, the spokesperson added.