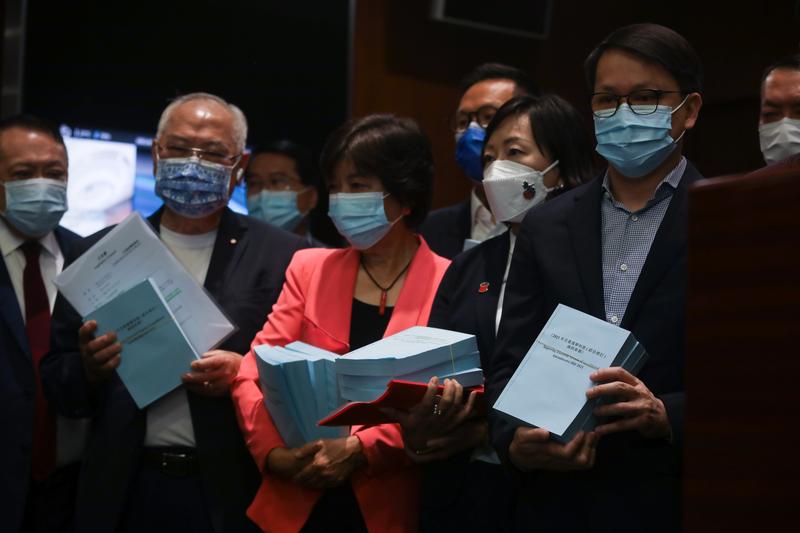 HONG KONG – An amendment bill on electoral changes received a groundswell of support from various sectors of society in Hong Kong as it passed its first reading in the city’s legislature on Wednesday.

The changes proposed in the bill, submitted to the Legislative Council for deliberation on the same day, are expected to optimize the city’s democracy and residents’ right to vote.

Speaking at a news briefing after the Legislative Council meeting, lawmaker Aron Kwok Wai-keung said the contents of the bill will help to ensure the full implementation of the principle of “patriots administering Hong Kong” in the city, which can improve the quality of the city’s democracy, as well as improve the governance team’s efficiency.

The bill mainly comprises six areas, including reconstituting the Election Committee that chooses the city’s top leader, revising the method of selecting the chief executive, and updating the selection and formation of the Legislative Council, as well as candidate eligibility.

According to the bill, the number of seats on the Election Committee will be increased from 1,200 to 1,500, and the four sectors will be increased to five. The new sector comes from local representatives of relevant national organizations.

Under the proposed revamped system, Albert Chuang Ka-pun, a Hong Kong member of the Standing Committee of the All-China Youth Federation, is one of those eligible to run for the reconstituted Election Committee.

Chuang sees the expansion of the Election Committee as an important part of the city’s democratic development, as it ensures wider representation.

The Hong Kong Coalition, an alliance initiated by 1,500 representatives from various sectors, expressed its support for the changes proposed in the bill on people’s right to vote.

Some optimized election arrangements have been written into the bill, including allowing voters to register online and giving priority to elderly people or pregnant women.

The proposed changes will not only help implement the “patriots administering Hong Kong” principle, but will also effectively protect residents’ legitimate voting rights, the statement read.

Starry Lee Wai-king, chair­woman of the Democratic Alliance for the Betterment and Progress of Hong Kong — the largest political party in the Legislative Council said that the passage of the bill should be accelerated in light of the three major forthcoming elections.

Coming up first is the election for the Election Committee, which is scheduled on Sept 19, followed by legislative elections on Dec 19 and the election of the chief executive on March 27.

Lee hoped that the bill would be passed as soon as possible to allow for adequate preparation for the elections.

Lawmaker and chairman of the bill committee Martin Liao Cheung-kong said he expects the committee could complete its deliberations by mid-May and the bill could pass its third reading at the Legislative Council by the end of May.