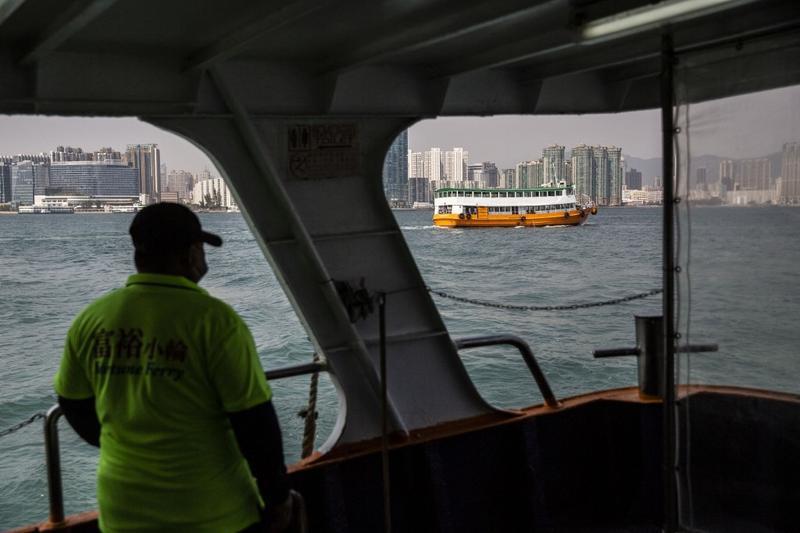 A worker looks out from a ferry as it crosses Victoria harbour in Hong Kong on February 20, 2021. (ISAAC LAWRENCE / AFP)

In a media briefing on Sunday afternoon, Chuang Shuk-kwan, head of the Centre for Health Protection’s communicable disease branch, said there were six untraceable local cases while more than 10 persons tested preliminarily positive.

The lone imported infection was from India, she added.

Chuang said one of the untraceable cases involved a red minibus driver who plied the Tsuen Wan to Kwun Tong route via Castle Peak Road in the morning.

“He had no fixed route..There’s no route number. If members of the general public who rode the minibus are worried, they should try to get tested,” Chuang said.

She said that 100 workers in a property agency in Sham Shui Po would also have to be quarantined after one IT worker tested preliminarily positive while another colleague was previously confirmed as positive.

Chuang also said that the Caritas Lok Yi School also had two students, a school worker, and a family member of a student  who were confirmed to have the virus. Two other school workers tested preliminarily positive.

According to the Hospital Authority, there were 232 patients being treate din 23 public hospitas and the AsiaWorld Expo community treatment center, including 18 patients in critical condition, and 12 in serious condition.