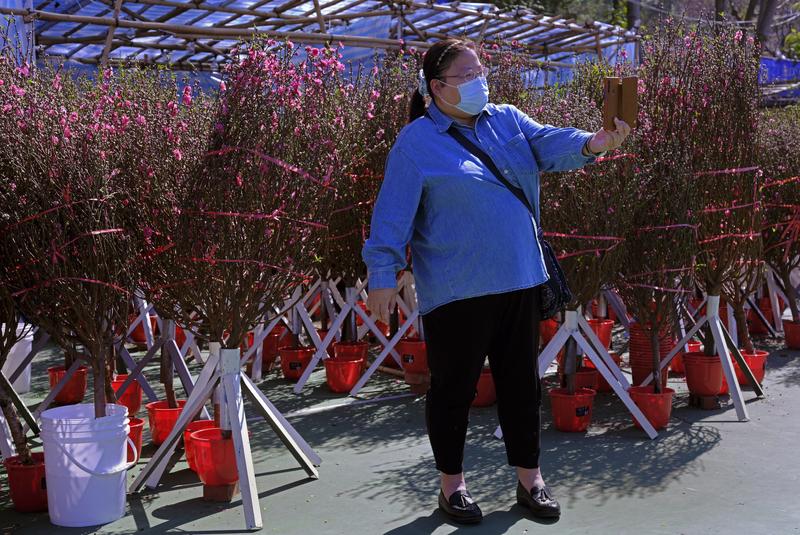 A woman wearing face masks to protect against the spread of the coronavirus, takes selfie at the flower markets in Victoria Park, Hong Kong on Feb 7, 2021. (VINCENT YU / AP)

In a media briefing, Chuang Shuk-kwan, head of the Centre for Health Protection’s communicable disease bureau, said the new confirmed cases included a homeless person while around 20 tested preliminarily positive.

In a media briefing, Chuang Shuk-kwan, head of the Centre for Health Protection’s communicable disease bureau, said the new confirmed cases included a homeless person while around 20 tested preliminarily positive

“We are still investigating whether he (the homeless person) has any close contacts,” Chuang said.

She added that five local infections were untraceable, including that of two unemployed persons, a housewife, and a resident for a care home for persons with disabilities.

Two more COIVD-19 patients have died, bringing the toll in the financial hub to 188.

An 82-year-old woman, who had a chronic disease, died due to COVID-19 on Monday night at the Prince of Wales Hospital, according to the Hospital Authority.

She was brought to the hospital on Jan 31 due to shortness of breath and her condition deteriorated until she passed away at 6:05 pm Monday.

Another COVID-19 patient with chronic diseases succumbed at 6.54 pm Tuesday. The 87-year-old man attended the Accident and Emergency Department of Queen Elizabeth Hospital on Feb 3 due to cough and shortness of breath. He was admitted to the isolation ward for treatment after being tested positive for the virus. His condition continued to deteriorate and passed away Tuesday.

There were 474 COVID-19 patients being treated as of Tuesday at 24 public hospitals and the AsiaWorld-Expo community treatment facility, including 24 patients in critical condition and 23 in serious condition.

Chuang urged members of the public to avoid or limit social gatherings during the coming Lunar New year holidays.

“For the coming holiday, we’re worried whether social interaction during the festival may case a rebound. Therefore, the public, during this festival, please maintain infection control measures,” Chuang said.

“Wear your masks; wash your hands’ and minimize social activities,” she added.

To Kwa Wan buildings sealed off

In a statement issued on Tuesday evening, the government said it has cordoned off two buildings in To Kwa Wan due to the potential risk of infection there.

Residents of Kiu Yu Mansion and Kiu Fat Mansion on Lok Shan Road were subject to compulsory testing and were required to undergo testing before 2 am Wednesday, the government said.

The move came as sewage samples from the two blocks had tested positive for the virus even though no confirmed cases had been recorded in the two buildings, the government said.

It added that it aimed to complete the operation at around 7:30 am Wednesday.

Meanwhile, the government said no confirmed case was found during the targeted testing conducted overnight in Sham Shui Po and Jordan.