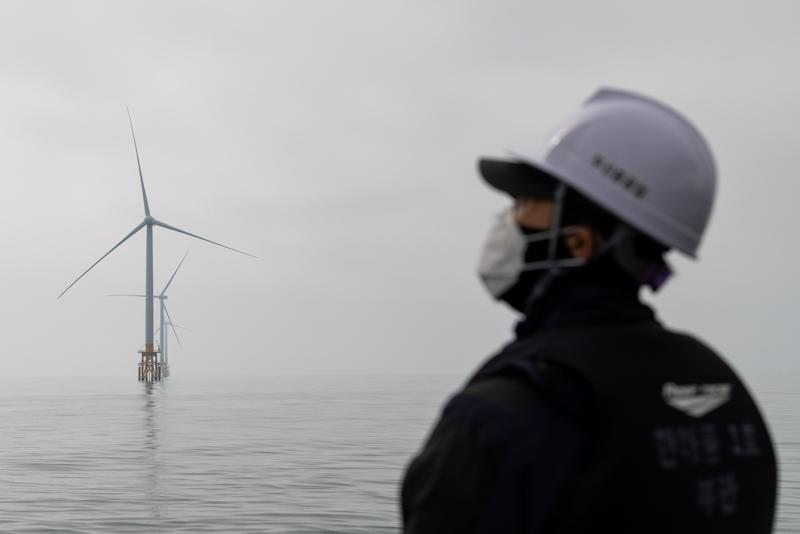 In this March 25, 2021 photo, a worker wearing a protective mask stands on a boat as wind turbines operate at Southwest Offshore Wind Farm in Buan, South Korea. (SEONGJOON CHO / BLOOMBERG)

CLP, one of the two main electricity generators in the city, said it is revisiting offshore wind technology, and may submit proposals for an offshore wind farm to the local government for their next five-year development plan starting 2023.

It is much more economic now to build offshore wind than it was 10 years ago.

Hong Kong, a city with sky-high land prices, has already set a goal to achieve net-zero emissions by 2050. To do so it will have to eliminate fossil fuels, which currently accounts for 75 percent of its power generation, with nuclear and renewables mostly imported from the Chinese mainland making up the rest.

“When you look at land being quite a valuable and a scarce resource. That leads you to think, well, what about the water?” chief executive officer Richard Lancaster said in a media briefing last week. “It is much more economic now to build offshore wind than it was 10 years ago.”

CLP had proposed in 2010 to build an offshore wind farm in southeastern Hong Kong waters, but the costs were too high at the time, Lancaster said. The average offshore wind project cost about US$134 per megawatt-hour that year, according to BloombergNEF data. That’s fallen to about US$89 this year.

It’s also easier to develop such a project near Hong Kong now, as an offshore building boom in the Chinese mainland, Taiwan and South Korea mean there are more ships in the region that specialize in erecting the towering turbines.

“We are continuing to consider the project’s feasibility with new turbines which are more effective at the relatively modest wind speeds seen in Hong Kong waters,” CLP said in a statement.

Solar power will be a relatively smaller part of the energy mix in Hong Kong, while nuclear, hydrogen and battery storage will all play a role, Lancaster said. CLP hasn’t ruled out making investments in China, and has been exploring renewable energy projects in Vietnam, he said.