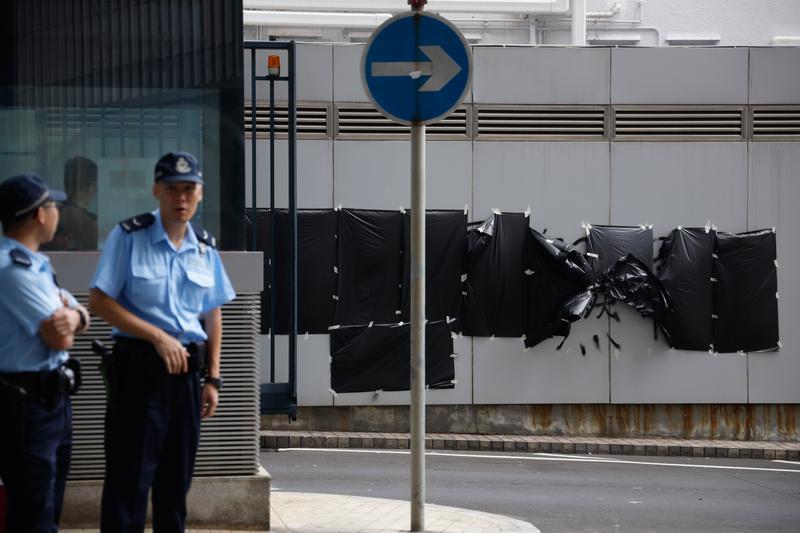 This June 27, 2019 file photo shows a wall covered by plastic as it was defaced by protesters, at the police headquarters in Wan Chai, Hong Kong. (PHOTO / CHINA DAILY)

HONG KONG – Hong Kong activist Joshua Wong Chi-fung was remanded in custody on Monday after he pleaded guilty to charges of organizing and taking part in an unauthorized assembly near the police headquarters during last year’s anti-government protests.

The sentencing is scheduled for Dec 2 and Joshua Wong, Agnes Chow Ting and Ivan Lam Long-yin have been remanded in custody

The prosecution played several news video clips in court which showed Wong and Lam inciting people to besiege the police headquarters during an unauthorized assembly on June 21, 2019. Agnes Chow Ting also appeared to be involved.
The sentencing is scheduled for Dec 2 and Magistrate Wong Sze-lai remanded all three in custody.

Wong also faces charges of participating in an unauthorized assembly in October 2019 and on June 4, 2020.

Earlier this year, Wong was disqualified along with 11 other opposition politicians and activists from running in a since-postponed election for the city’s Legislative Council.

Wong spent five weeks in jail last year for contempt of court, before being released on June 16, 2019.

With inputs from Agencies