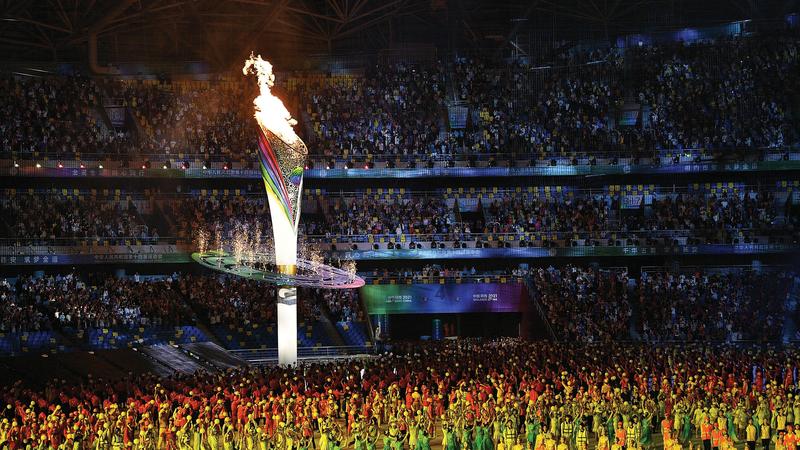 The cauldron of the 14th National Games is lit during the opening ceremony on Sept 15, 2021. (XUE YUGE / XINHUA)

The flag handover ceremony will be held in the closing ceremony of the 14th National Games in Xi’an, Shaanxi province on Monday evening.

The closing ceremony, which will start at 8 pm, is expected to be broadcast in Hong Kong on Radio Television Hong Kong (RTHK)’s TV 32 channel, mobile apps and websites, as well as on local television broadcasts.

During a meeting with the governor of Shaanxi province Zhao Yide, Hong Kong Chief Executive Carrie Lam Cheng Yuet-ngor expressed hopes for the province to share its valuable experience in hosting the games

The Hong Kong delegation has bagged two gold and five bronze medals at this year’s National Games held in Northwest China’s Shaanxi province from Sept 15 to 27. A total of 169 Hong Kong athletes were sent to compete in 18 sports out of a total of 35. This year was the seventh time for the city to take part in the national sports competition.

Monday is also the last day of Lam’s weeklong visit to three mainland cities since Wednesday. She has been to Chengdu, Chongqing and Xi’an.

Arriving in Xi’an on Sunday, Lam met with the governor of Shaanxi province Zhao Yide and expressed hopes for the province to share its valuable experience in hosting the games.

Lam also extended her gratitude for the support of the General Administration of Sport of China for the joint hosting of the 15th National Games by Guangdong, Hong Kong and Macao.

She said that she hopes that the General Administration of Sport of China will continue to provide guidance and that the Hong Kong SAR will get fully prepared for its participation in the hosting of the National Games.

In a congratulatory statement, the President of the Legislative Council Andrew Leung Kwan-yuen, on behalf of all lawmakers, said in the face of competition from all elite athletes in the sports sector of our country, Hong Kong athletes fearlessly went full steam ahead and achieved good results.

“Guangdong, Hong Kong and Macao will co-host the 15th National Games in 2025. This precious opportunity given by the central authorities will not only enhance sports development in Hong Kong and strengthen social cohesion, but also foster Guangdong-Hong Kong-Macao cooperation on all fronts with far-reaching significance. It’s believed that all sectors in the community will give unreserved support to this important sporting event,” Leung said.