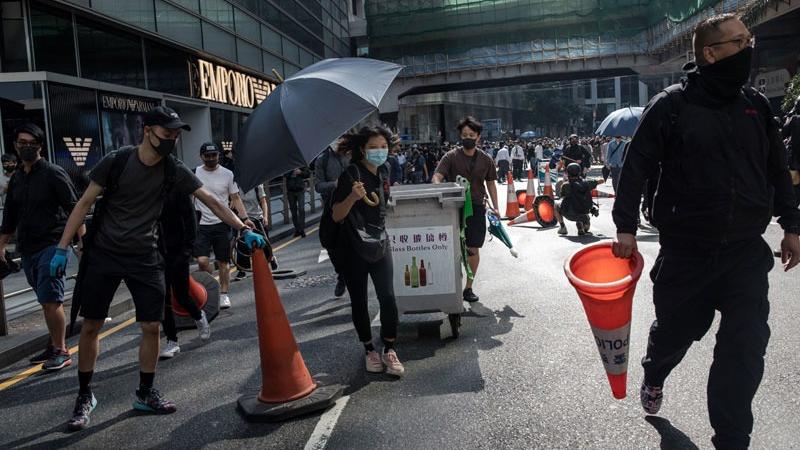 Protesters create makeshift barricades during a demonstration in the Central district of Hong Kong, on Nov 11, 2019
(NICOLE TUNG / BLOOMBERG)

HONG KONG – Local legal experts and scholars on Friday blasted as “unethical” an academic study led by multinational scholars because it offered cash incentives for Hong Kong students to participate in protests in 2017 and 2018.

The study enrolled 849 students from the Hong Kong University of Science and Technology and paid those who provided information at the events HK$350 (US$45) each. The results of the study were published in the latest issue of the American Economic Review, a monthly academic journal.

Senior Counsel Ronny Tong Ka-wah told China Daily he found the project “academically unethical” and “morally unacceptable”. The practice of paying students to take part in an assembly runs counter to the basic elements of free expression in Hong Kong, he said.

The practice also constitutes a degree of deception as it creates a false impression to the community and to the world that the participants were expressing their free will, but the involved students were not participating to express their viewpoints will in the two July 1 marches involved, he said.

Lau Siu-kai, vice-chairman of the Chinese Association of Hong Kong and Macao Studies, and a professor emeritus of sociology at the Chinese University of Hong Kong, said that the students involved were put at risk of becoming unwitting protesters against the government.

The study found that individual incentives led to an immediate increase in protest turnout, and the students who had an indirect incentive to protest tended to remain engaged in political protests after the one-time mobilization and sustained social network influences. 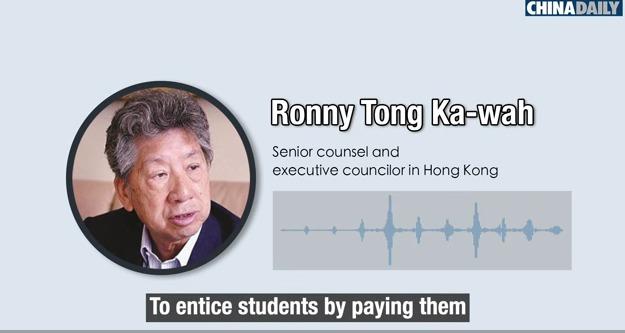 Senior counsel Ronny Tong Ka-wah said it was unethical for a study led by scholars overseas to pay students in Hong Kong to protest.

Barrister Lawrence Ma Yan-Kwok added that the study may have exposed the students to the risk of participating in illegal assemblies and being subject to criminal prosecution. There was still a risk that these peaceful and authorized assemblies on July 1 would evolve into illegal assemblies following disorderly, intimidating actions of the participants or so forth that raise fear of breach of the peace, he said.

The Hong Kong University of Science and Technology, in a statement on June 3, said one of the five scholars involved in the study had left the university in September 2019.

The university said the study also failed to pass a review by the university’s Human Research Ethics Committee at the end of 2019 because of its misrepresentation in its application to the committee.

The proposal did not reveal that a core of their study design was to induce protest turnout, nor did it say the subjects would be paid on-site at the protests.

Tong said that the universities bore responsibilities in addition to reviewing the study proposals. For example, the universities should have produced guidelines for students to help them assess the moral hazards of being a subject of any research or experiment.

The universities’ responsibilities also extend to processing research applications from a national security perspective, including the research’s purposes, methods, and results, following the promulgation of the National Security Law for Hong Kong in June 2020, Lau said. For example, the university should take action if it finds that a study might draw students into the streets and induce them into protests that threaten national security, he said.

Tong said the students should now be made aware of the legal consequences of receiving money from research organizers outside Hong Kong and following their instructions, as this could be an offense under the National Security Law for Hong Kong, which criminalizes collusion with foreign forces to endanger national security.

“I would ask very strongly all students to be extra careful in this respect and in particular not to easily accept money from people outside Hong Kong,” Tong said.

He also said that since the study provided that social networks are a major factor to have the persistent effect of protest participation, the students should be exposed to a wider range of opinions and develop their critical thinking and independent judgment of all matters. They should also express their opinions of their own free will, rather than being easily swayed by monetary rewards.